One of the great parts of my job as a split classroom teacher and division consultant is that I get to spend time in classrooms from grades six to twelve. This means I often need to be in one head space to teach my own Grade 12s and then switch gears to act with younger mathematicians. It also means that the classroom experiences are sporadic and involve teachers working in several different places in several different curricula.

On this particular occasion, I was working with a 7/8 split class that had just finished a unit on perfect squares and divisibility rules, and we wanted an activity that could serve as a sort of review of divisibility rules but also reveal something cool about perfect squares. I thought about the locker problem, but it doesn’t require students to factor in order to see the pattern. Instead, I took some of the underlying mathematical principles (namely: that perfect squares have an odd number of factors) and wrapped it in a structure suited for a Friday afternoon.

While the students were at recess, the classroom teacher and I sectioned the board into 16 spaces. In each space we wrote, “1 Factor,” “2 Factors,” “3 Factors,” etc. This continued until there was a section for every number of factors from one to sixteen. Then we printed out a hundreds chart and put it in a dry erase sleeve. When the students came in, they sat in groups around their Wipebook dry erase board and we reviewed two types of factoring: listing prime factors and listing all factors. We made it clear that today were were focused on finding all factors. We then introduced the activity.

Each group was to nominate a reporter. Their job would be to get a number from me and then bring back to their group. The group was tasked with listing all the factors of the number and counting them up. When they were confident in their total, the reporter would then record the number in the appropriate section on the board and see me for another number. As an example, we counted the factors of 30: {1, 2, 3, 5, 6, 10, 15, 20} and placed the 30 in the section entitled “8 Factors“.

The goal was to crowd source the work for the numbers 1-100. Every time a reporter asked for a new number, I would give them the next available on the hundreds chart and cross it off. The system worked really well! We took a break after the first fifty numbers and gave the students a chance to challenge any of the placements. We also strategically challenged perfect square numbers that were placed incorrectly. 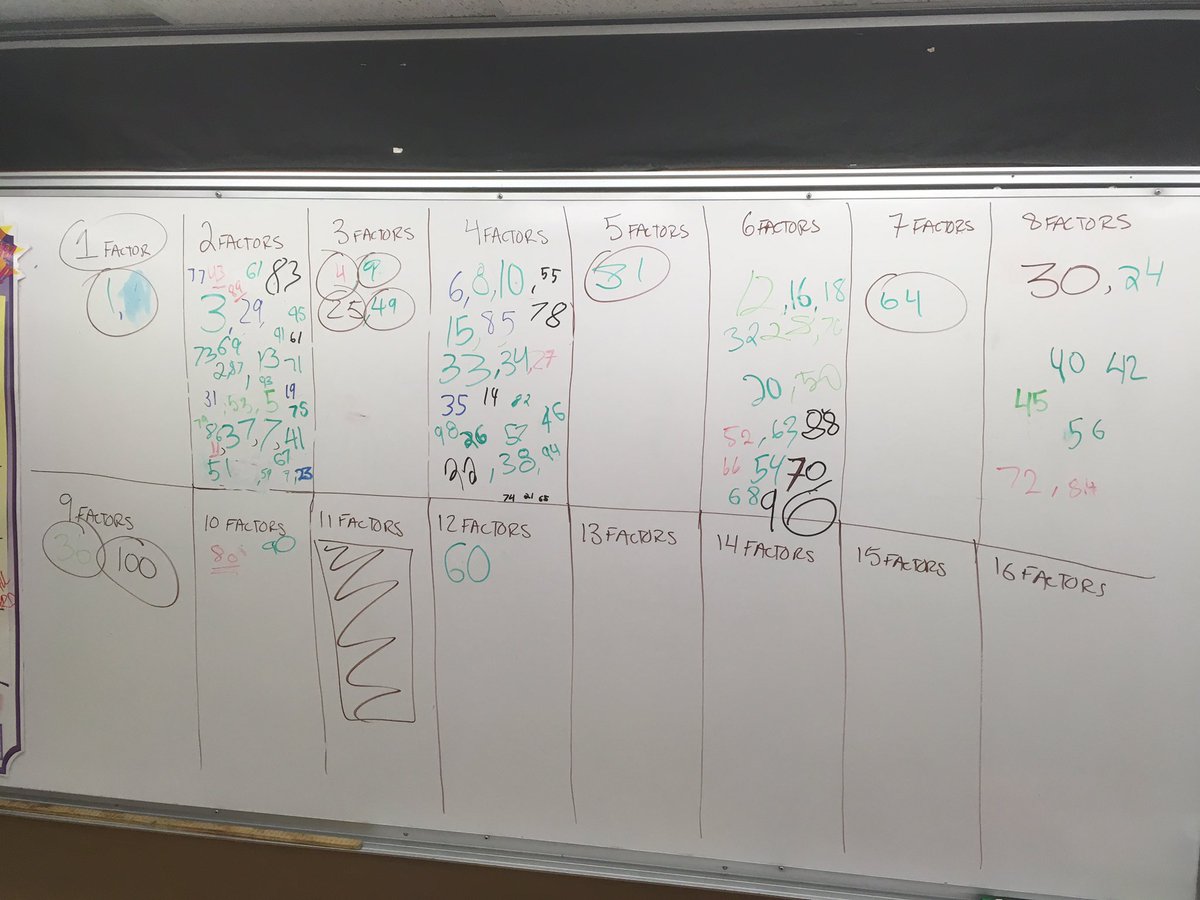 One student immediately worried that we might get a number with more than 16 factors. I told him that we would happily add a section on the board if that were to occur. Not long into the activity, I heard him comment to his group that there was no way that 16 factors would happen. It didn’t take long for learners to get the impression that factors are tough to come by.

I also noticed that the divisibility rules came into play quicker than I expected. I imagine this was due to the recency with which they had studied them. Also, I realized that I really hate the divisibility rules. I saw several students default to mechanically employing these rules instead of using numerical reasoning. When questioned, they were able to reason with a variety of strategies like finding a close multiple (i.e. 3 divides 84 because 3 divides 81) or decomposing and dividing (i.e. 4 divides 68 because 4 divides 60 and 4 divides 8). However, these strategies took a back seat to rules that (in my observation) contained little connection to the structure of numbers. Rant over. Our standards include the divisibility rules, so we provided them as an option alongside these other strategies.

Probably the most interesting action came from two students who, when they asked for a number, would ask for a switch when they were given a large, odd number. For instance, I offered a student “71” (because it was the next on the list), and she requested “72” instead. Then another student asked for “90” instead of “89”. When I pushed for the reason behind the trend, they said that they didn’t want to get “stuck” with a large number that didn’t have any factors. This struck me as interesting, and we discussed this sort of intuition. What features of a number make it seem like it will have few factors? Students talked very openly about this prime number inkling.

After the numbers 1-100 were categorized, we took a deep breath and asked the class what they noticed about the board. Below are some of their observations:

This last noticing was the place where we wanted to live for a while. We wrote out the factors for “36” and noticed what was different than the previous trial with “30”. Very quickly, students saw that not every number had a “partner,” and this was causing the odd number of factors. Before we cleaned up, we left the class with a challenge:

Build a number with exactly 11 factors.

Full confession I love the divisibility rules as a gateway to a lot of number theory. Does the curriculum explain why they work? The 3/9’s are particularly interesting when seen the 1st time.

I believe the curriculum would include them with a caveat that they are explained past procedural implementation, but (in my experience) this is not the case. Too bad because I agree that they are fascinating when we begin to talk about polynomials in the 9th Grade.

Well, did they come up with a number with 11 factors?