Let it be known that I am not a huge fan of math board games. That being established, I have tried on multiple occasions to create one that I like because the undeniable engagement factor is there. One of two things always seems to happen to my attempts:

Prime Climb is the first game I’ve encountered in a long while that avoids both these follies. Also, it has the added benefit of prompting students to work flexibly with the four basic mathematical operations. Often times, games in class are justified loosely on the grounds that they will induce some type of logical thinking. Prime Climb had my students thinking about number strings and composition of numbers within a larger strategy. All of this was tied up with the healthy competition that led one student to declare, “it’s like Sorry! for nerds!”
For Canadian audiences, I would peg the mathematics somewhere between a Grade 4 – 6 level. It works with many combinations of the four basic operations, and the elegant board design triggers conversations about prime numbers and factors. It is designed for up to four players, but we played in four teams of three members. Having the groups make communal decisions only made the thinking more audible, adding further value to the experience.
After we played for a couple days, I introduced my students (who were in Grade 9) to the idea of #PrimeClimbPuzzle because I wanted them to experience a greater creative challenge. The inventor of the game, Daniel Finkel, tweeted a couple of puzzles where a game board situation was imaged and then a question was posed asking the solver to determine what sequence of actions (based on the game rules) led to the provided situation. My class an I went through the two available puzzles and then set out to create our own.
I am in love with the results. (Which, perhaps is ironic considering the name of Dan’s company is called “Math for Love“). Students worked very hard to come up with an interesting hook for the puzzle. On top of that, beta-testing their puzzles furthered the flexible arithmetic that the game initially inspired.
Here are four examples of their puzzles; all eight of their puzzles can be found in this folder. You will have to experience the gameplay to fully understand the puzzles. I recommend you find a way to play the game in your room.
The “How did we get here?” puzzle. 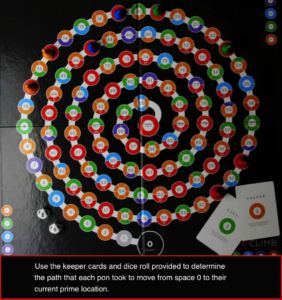 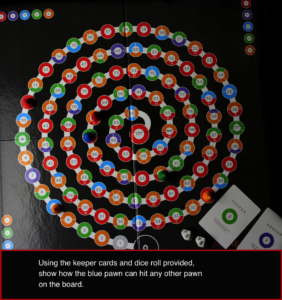 The “Where did we start?” puzzle. 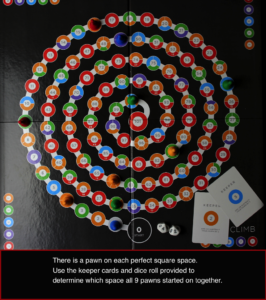 The “What colour are we?” puzzle. 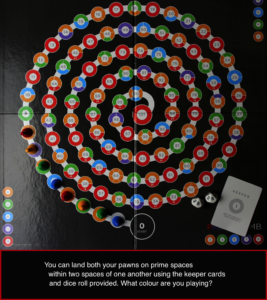 These puzzles have all been tweeted out using the hashtag #PrimeClimbPuzzle. If you and your students are so inclined, feel free to add to the collection.
NatBanting
**Thanks to Jenn Brokofsky for providing two copies of Prime Climb for my class to borrow and to Ali Alexander, the photo teacher in my building, for taking the pictures.

Thanks for sharing. I too get frustrated with using board games in the class, as they often fail to reach the intended goal of reinforcing the taught skill- so I'm excited to learn more about this one…

[…] From his site, I have learned about the math board game, Prime Climb, and its applications in his classroom. He has some deep reflection on teaching in general, and I appreciate his opinions in his post on […]