I have taught Grade 10 math more than any other class. I still have lessons that I created during internship that I use. Other sections of the curriculum I have perfected over the years. Today, I added another lesson to the list of those that I will do for a long time. This is my desperate attempt to describe and catalogue it. If I don’t do it now, it will filed as a good, but vague, memory.

My goal was to introduce the idea of slope and be able to get numerical values for slopes from graphs. I also wanted to introduce the four types of slope: positive, negative, zero, and undefined.

The class began with a quick discussion on how rate of change relates to slope. I handed out student whiteboards at the beginning and drew four lines GeoGebra.

I gave each line a label (A-D) and asked students to decide which line had the largest slope. Ninety-five percent of the students answered that Line C had the largest slope. This told me two things:
I took the second slope and began a discussion. One student said:
“It is either A or C”
When I questioned him why he answered,
“Because I don’t know if it matters if we are going up or down.”
I took this distinction and introduced the idea of positive and negative slope.
From there, I wanted to show students that it is important to have a strict labeling system for lines. I got the whole class to close their eyes, and one student to describe a line projected on GeoGebra. Every student was to listen to the description, and then draw the line on their whiteboard grid.
The first line looked like this: 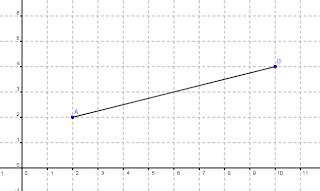 The student began explaining the line. She said that is was “pretty flat” and “straight”. She also commented that it was “pretty long”. At this point, students began to become irritated. One asked if it had a positive or negative slope. Another asked to count the boxes. I was pleased that they realized that counting boxes could give the slope of the line, but asked them to be quiet.
When she was done, I had students graph the line. We discussed how the description could have been more specific, and the tactic of counting boxes came up. I quickly reminded them that we did this before with rate of change and we developed the well known “rise over run” formula.
I then gave this line for the same girl to describe: 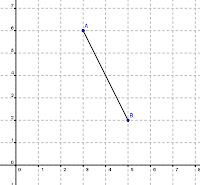 The girl immediately commented that the slope was negative. She then said it was fairly steep. She then proceeded to count the boxes and devise the slope in her head. When students drew the line on their boards, almost all of them scribed it correctly.
We used whiteboards to practice calculating slope and ended class with a discussion of division by zero. The lesson became an exercise in mathematical communication. Standardizing how we talk about slope helps us interchange mathematical ideas. Students left the room fully understanding why we had to use a numerical scale when discussing slope. Any time students can experience reason behind their work, it is powerful.
NatBanting

One reply on “A Discussion on Slope”

Nat, you know you successfully have described and catalogued your idea when this English teacher can understand it… Great lesson! Thank you for sharing.