I always introduce linear functions with the idea of a growing pattern. Students are asked to describe growth in patterns of coloured squares, predict the values of future stages, and design their own patterns that grow linearly. Fawn’s VisualPatterns is a perfect tool for this.

While stumbling around Visual Patterns with my Grade 9s, we happened upon a pattern that was quadratic. The students asked to give it a try, but we couldn’t quite find a rule that worked at every stage. While I knew this would happen, the students showed a large amount of staying power with the task. The pattern growth was an engaging hook. After a conversation about what made this pattern ugly (the non-constant growth), we looked at the growing square.

It was then that I decided to try and insert patterns into the introductory unit on quadratics–a notoriously dry and abstract topic (at least in my class). I developed a series of quadratic patterns and animated their growth on Vine. They can be found on the Vine page on this blog. (Look for Quadratic Patterns). Each one is represented as a yellow set of blocks, but then as coloured blocks to illustrate possible ways to visualize the growth.

The plan was to play with patterns, develop quadratic functions, and then use the blocks to find the shape of the new, non-linear graph.

How I Structured Class:

I randomly grouped the students into groups of three, and started them off with a linear pattern from my Vine page. Once we discussed how to generate a relation, I asked them to copy down the first three stages of this quadratic pattern: 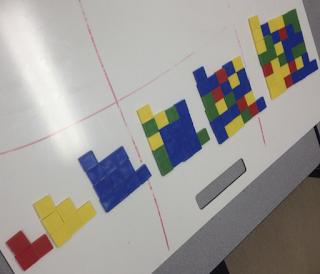 I then gave them each a handful of tiles, and asked them to model stages one through six. This took a little bit of trading as some groups became obsessed with having the colours match in all the squares. This (while slightly OCD) came in handy in visualizing the graph later. 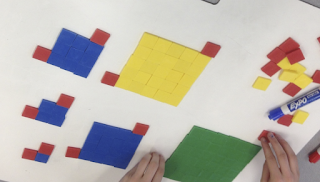 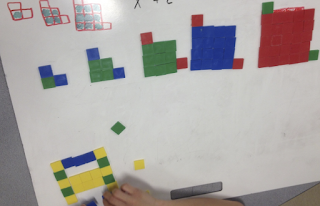 Once all their stages were built, I collected residual blocks, and then ask them to do the unthinkable–destroy their patterns. But keep the stages separate. I drew a Cartesian Plane on the board and told them to use the tiles to build a sort of bar chart on their tables.

The results were the shapes of the graphs of parabolas.

Some decided that, to save space, they would stack their blocks.

This quickly became the method of choice throughout the class. 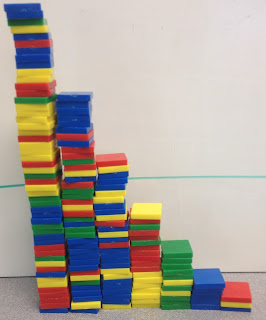 The cool thing was the conversations that emerged from the blending of the representations. Students began to use the metaphors of scaffolding that was holding up the graph, and roller coaster supports while the graph was the track. Some began to comment that it is good they didn’t go past six, because it would have got out of hand. It provided an excellent image for them about the increasing slope of a parabola.

We talked about the cause of the rapid growth, and settled on the square. If we wanted it to grow slower, we would need to minimize the effect of the square. This brought the idea of width into play. We asked what would happen if negative stages could be represented. We used the function we built to help us conceptualize a “stage -1″. It didn’t take long until they had the concepts of vertex and axis of symmetry. (Although formal verbiage only became established when it became necessary for efficient communication).

I found myself referring to the activity when we were talking about the concept of range. We recalled how the patterns quickly out grew the tables, and would have continued on if we would have added stages. This helped them anchor the idea of an infinite range.

Quadratics occupy a large chunk of our grade 11 math curriculum. This was a nice way to connect a representation commonly used for linear relations and functions in the previous grades (that of the growing pattern) to the graphical and algebraic representations of quadratics.

Alex Overwijk posts about his experience with a similar exploration.

One reply on “Connecting Quadratic Representations”

Nat,
This is great! I'm totally putting this on my list of things to try next year.
-Andrew