Math 9 poses the specific challenge of pre-assessment. The wave of administrative details (lockers, fees, photos, textbooks, tryouts, etc.) creates a logistical whirlwind for teachers. On top of that, you have no clue who (most) of these new students are, or what their mathematical history is. Our department gives a short pre-skills exam to help with this process, but I like to use the first week to work on integer tasks to really see how the newbies move mathematically–beyond a number on an exam.

One such task was stolen (read: borrowed) from Timon Piccini. I decided to place focus on the idea of zero pair and the movement away from and toward zero.

What follows is just another set of (very simplistic) resources for the class to add to the excellent work that Timon has already created followed by a brief synopsis of the questions that worked well for me and my students.

My grade nine classes curate portfolios for classroom starters and short pieces of assessment I need along the way. The day began with a start-up question:

2, 5, 9, 15, 4
Using addition and subtraction, create an expression (using all five numbers) that is as close as possible to zero.
Be prepared to explain your strategy.

This came after the previous day the class played a modified version of the game Zip, Zilch, Zero.

Both focused on the balancing of results around a central target by moving along the number line using addition and subtraction.

After the starter, the day began by grouping students into threes, and having them grab a large whiteboard. Each group got a marker, eraser, and handful of green (positive) men and red/white zombie (negative) men. 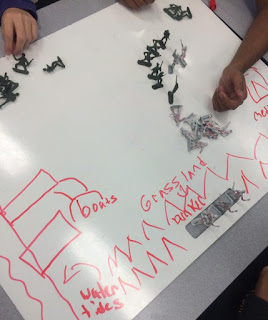 I began by explaining that each man had the same power despite many of them missing legs, arms, and wielding broken guns. Like Timon, I created a IWB file with an infinite cloner to mimic student battles. I used these two army men to create my digital version. 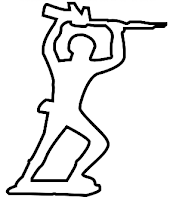 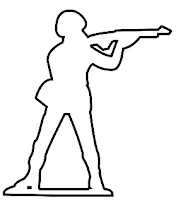 The idea of “0” battles or stalemates became important. The first slide focused on what would need to happen if the battle were to be a draw. Some students placed no men, most place one from each side in a man-v-man scenario. I stressed that a stalemate could happen with any number of soldiers on each side as long as it was the same amount on each side.

I used this .pdf file to take students through possible battles I wanted them to create. Each time, I asked students if they could create another scenario that represented the same battle or model it on the front board. The focus was on the conversations and animations. The slides include many examples, and I ended up skipping through once they became very proficient.

The army men did more than wrap a math topic in a whimsical motif, they built the metaphor of retreat. This is one that I will continually return to (I’m sure) throughout the semester.