Rationale: Create a game that embeds the skills of adding and subtracting integers into a conceptual decision making structure.

Objective: Insert a set of integers into a 4-by-4 grid so that the sums of the rows and columns is a minimum.

Game Set-up:
All the students need is the game board and the list of sixteen numbers. 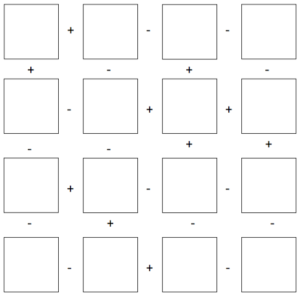 The board consists of sixteen boxes arranged in a four-by-four array. Space is left between the boxes to insert the addition and subtraction signs. You can give the students a blank board and have them all fill in the operations to match a board projected in the room, or you can write in the operations before you make photocopies. Every space between boxes needs to contain either an addition or subtraction sign.

The arrangement is somewhat arbitrary, but it helps to have a fairly even distribution of both signs to increase the chances of students having a variety of skills to practice. The goal of the game is to arrange the numbers so that the sum of every row and column is a minimum. If the board contains a large majority of subtraction signs, then a high frequency of positive numbers would allow the sum to reach lower levels. You can play with a pre-determined list of numbers you give to the students. You could allow them to choose between two lists, or generate the lists randomly on the spot using playing cards.

After all sixteen numbers are placed, students calculate the eight sums (four rows and four columns). The results of these eight are then summed to get their final result.

Lines of Reasoning:
Students usually play the first round of the game with a pseudo-random strategy. Some only look at the rows while making decisions (this is the most common in my experience) and others only look at the columns. Most begin with the foundation that to get the smallest sum, you need to add negatives and subtract positives.

It doesn’t take long for students to realize that the boxes are more interconnected than originally evident. If we read the grid from left to right, the boxes on the right edge are more connected than the left edge. This means negative numbers fit naturally on the left edge. This seems like a great strategy, but there could be boxes on the board that are connected by two addition signs (one in a row and one in a column). It may be more profitable to use the negative numbers to negate both of those addition signs rather than placing it on the left edge.

Boxes connected with two negative signs seem like they should hold positive numbers, but if there are no positives available, perhaps the smallest negative number must due. Is it then more profitable to remove a negative number from the left edge and place it there to avoid adding the positive number twice? These are some of the decisions to be highlighted.

When final answers begin to percolate in, I like to ask, “What caused that arrangement to be lower?”
Contrasting arrangements on two boards is no simple task. If you want easy extensions, make the target the largest sum or the sum closest to zero. You can also only provide 15 numbers and allow them to insert a wild-card entry between -6 and 6.

Game Board Download:
You can alter the addition/subtraction ratio as you see fit. You can change their locations. The list of numbers in this sample game has been randomly generated randomly and there is nothing special about it. This download is a starting point; play with it to create subsequent rounds of the game.
Download a blank game board here.
Download the sample game here.

5 replies on “Limbo: An Integers Game”

Wondering about making it a game vs its cool puzzle status. What if you dealt in cards (playing cards A-9+J=0, red negative, black positive), then players/teams can make a swap. Score points for lowering a row or column total. (Lose points for raising?) Game ends after n turns or 2 passes.

If they don't switch, they could deal a new card off the deck.

I like this John! Has a Freecell vibe to it.
Do you envision the grid starting empty? Then after the first 16 turns, they must begin to swap? Game ends when deck runs out.
Something I am going to think about. After the students are comfortable with the structure (and arithmetic), this would be a killer extension. Thanks!

I think I might start the game with the board filled in. The random starting state would add a lot of variety to playing.

I like this game; it reminds me of Cross Crib http://www.crosscribb.com/how.htm I can envision two players competing on the same board by drawing cards in turn and placing them to maximize their own chances of winning. Further extension: bonus for the diagonals. Thanks for sharing!