I was watching Saturday morning cartoons when this commercial was aired.

High energy music and neon flashes of light are often used to sell car related toys on these stations, but this commercial caught my eye. Upon first viewing, I thought I saw them advertise speeds of

I was initially surprised at this huge velocity, but then figured that the station was using a play on units to exaggerate. They never mentioned what the abbreviation “mph” actually stood for–I had assumed miles per hour. I wrote down the name of the toy and made a mental note to write a blog post about how numeracy is necessary because even toy companies prey upon deficiencies.

I assumed that “mph” must really stand for “meters per hour” and converted the 1500 figure into miles per hour. It turns out to be around a single mile per hour. I figured this was reasonable, and left the problem at that.

Later that day, I searched YouTube for a video of the commercial and was surprised with what I missed in my original observation. The actual statistic given on the screen is below: 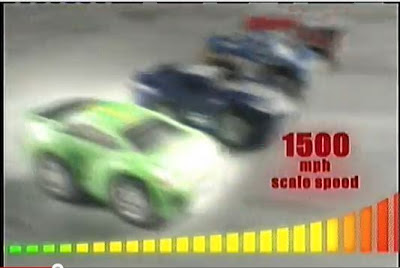 The 1500 mph was meant to be read in “miles per hour” but the company had scaled the speed. What was that supposed to mean? What was the speed scaled in relation to? How were poor kids supposed to know how fast the toys actually traveled?
My guess is that the makers of the commercial took the scale factor of the dimensions of the toys to an actual race car and applied it to their speeds.
Our toy is this fast but if it were “x” times larger, it could reach speeds of 1500 mph
Is this even mathematically possible? I struggled with the answer. If we were to take the toy and manufacture it larger, would it travel any faster? What if we made it smaller? Wouldn’t that make the “scaled speed” even more impressive?
For that matter, what quantities are “scale-able”? I know I can scale lengths and distances, but what about temperatures? Is a smaller iceberg any less warm? Do we predict the temperature of a piece of ice by its size?
What about force? Don’t storms become more violent as they grow?
The whole concept of scaling speed threw me off. The problem had interesting applications to the classroom. If we assume that the unit used was “meters per hour” it is a simple conversion problem. If we allow the scaling of speed, we should be able to predict the toy’s size if given specifications on similar, existing racing vehicles.
Curriculum aside, is scaling speed legal? If it is, why do we care? Is there any quantity that cannot be scaled? Seems like too much thought for morning cartoons.
NatBanting

4 replies on “On a Smaller Scale”

I have to get all 60 of these!!!! I love fast toys!!! I've never thought of speed as scaleable in this context either. I want to think it's proportional to the mass of the toy car. "Size" is a vague term to me because I'm not sure if it's volume or mass we're referring to. Thanks, Nat.

When I think of scale speed, I think of being in an airplane. When I look down at cars they seem to be crawling by. That's what I think of as scaled speed. Since the cars in the airplane look maybe 1cm tall (scale to what 3-4 m?) and they travel what looks to me like a foot (but is really more like 100-200 m) in a span of a 5-10 seconds. Well 1/5 ft/s is a scaled speed of what is really happening.

Does that make sense? I know it does in my mind, and I am extremely tired right now.

@Fawn Great point. Scaling according to mass must yield a must greater scale factor due to materials used. What about surface area? Can we figure out what they are actually scaling by looking at real world prototypes?

@MrPicc I get your analogy. I wonder if it holds. Does a car that looks 1/100th of its size actually appear to be travelling exactly 1/100th of its speed? Worth investigating.