My class always welcomes conjectures. This is made explicit on the very first day of the semester. This goes for everything from grade nine to grade twelve. As the grades advance, the topics have us venturing into increasingly abstract concepts, but conjectures are always honoured.

Certain class structures promote conjecturing more than others. Students offer questions during lectures, but they are often of a surface variety. They notice a pattern that has occurred in three straight examples, or think they have discovered a short-cut. I don’t like using tricks, but if they are “discovered” or “re-invented” (to borrow a term from Piaget and genetic epistemology), then we use them.

Several posts on this blog have been born out of conjectures offered in class. Many task ideas come from shifts in tasks that we were working on. By far the most profitable, conjecture-rich structure has been that of large whiteboards. There is something about the organization mixed with the rich problems and communication obligations that opens student minds. Regardless of class structure for that day, if a conjecture arises, I get everyone’s attention:


“I need your attention please. [Insert name here] has a conjecture to make.”

After the conjecture is made, we have a conversation around its feasibility and even vote on its validity. Some groups (or individuals) devote themselves to refutation, while others remain in whole-hearted affirmation. It creates an interesting (yet non-competitive) dynamic. Some students even like having their conjectures disproven and get right back to modifying them to make them stand.

When I feel like I have loosened the curricular pressure, I take my students through explicit problem posing (conjecturing) exercises. We use the process documented explicitly in Brown and Walter’s book. I complete this exercise with a task that is solvable in 5-10 minutes and has many discrete attributes that can be changed. That leaves plenty of time to pose new problems, exchange, attempt solutions, and discuss.

Side note: The Art of Problem Posing is a must read for any teacher of mathematics at any level. It’s algorithmic encapsulation of the fluid process of posing problems jives well with beginners and is extended easily for experts. Like seriously, stop reading this post and get that book. L-I-F-E C-H-A-N-G-E-R.

On this particular day, I gave my grade 9s the “Poison Pills” problem from Stella’s Stunners. (The initial solution offers avenues into factors and multiples) 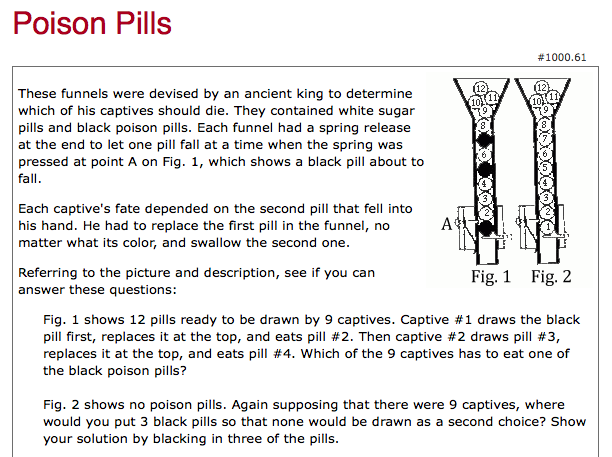 The problem has nice places for students to create conjectures. For example, students quickly realize that two poison pills can ever be adjacent. They can use these certainties to build on their solution.
After we solved the problem and discussed, I asked them to change attributes and exchange new problems. These are the new problems they created:
We managed to solve a few of them, but had to leave some for them to work on in their problem journals.
There are three large benefits to encouraging problem posing in class:
Mathematical Intuition
Students were able to recognize and reason why new problems were too easy to even spend time on them. This is a great thing to see as a teacher. Four months ago, these same kids would have happily accepted work that resulted in no cognitive struggle, now they ditch their new problems because they see quick solutions.
Mathematical Complexity
Students quickly discover that some of the hardest problems come from a simple switch. Their instinct was to change almost everything about the problem until the original was a distant cousin and fleeting memory. Some groups found that shifting one small attribute can create a difficult problem. The beauty and intricacy of mathematics shows itself.
Mathematical Ownership
Students would much rather work on problems they authored. It makes me think of a quote from a recent presentation: “You know what students are interested in? Their own thinking”. Students took these problems home and created new ones from them. I even had one student bring back an idea for a card game based on his problem. This ownership can be authored into problems in subtle or extreme ways.
I remind my students that a good mathematician will try and keep problems alive. We are so used to math being about killing the problem–problem solving. While this is a noble pursuit, I am more interested in resuscitating problems and extending their mathematical lives–problem posing. What can we do to revive or extend this curiosity. A good class, in my books, leaves with more problems than it started.
NatBanting