The following task happened by accident:

I was about to introduce a problem to my Math 9 Enriched class that we were going to complete with group whiteboards. Before I could introduce, life got in the way. Students wanted to know about their most recent examination. As I launched into a speech on their performance, a student got up to sharpen their pencil. She walked right in front of me. I made a comment, and she replied that the garbage can should be in the back corner where it would be more convenient.

I told her that having it by my desk was most convenient for me. Then another student said:

“Why don’t we put it in the middle of the room? Wouldn’t that be the most convenient?”

In this class, we call this “breaking the math”. Students are always welcome to stop our class and make a conjecture. When this leads us into further problems, we joke that the conjecturer broke the math.

I then flipped the question (to many groans from students) and asked where we would place the can so that if every student had to travel directly to it, we would travel the least amount of distance collectively.

After setting some parameters about the room, we whipped up an idealized model on the board (pictured below). We decided that the can should be on a grid intersection and the distance between each student is one meter. Also, the students travel as the crow flies. I placed dots where the students were sitting around the room. 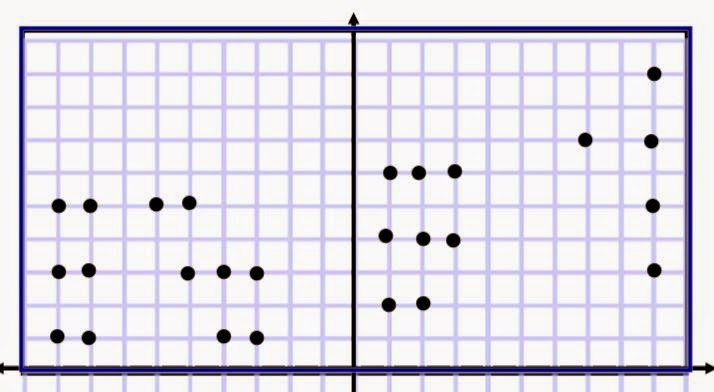 A few really cool ideas began to emerge. It should be mentioned that I foresaw the close parallels to the Road Building task. I anticipated that the Pythagorean theorem would need to be used. I didn’t let them know this until one group unearthed the massive amount of calculation that was necessary.

Once this was common knowledge, groups turned their attention to symmetry. They tried to place the can in a spot that created as many congruent triangles as possible. This enabled them to cut down on their calculations. I over heard the verbiage of 2-3 triangle and 4-5 triangle. They began to name the triangles based on the length of the legs.

One group noticed that any seat in the same row or column with the can didn’t require a calculation. They then decided to set their sights on finding the placement that was collinear with the maximum number of students.

We had a conversation about the meaning of “center”. The geometric center of this rectangle may not be acting as the center of the people placed within it. I saw parallels to measures of central tendency, but decided that it was not in the class’ best interest to switch to statistics at this point.

After answers filtered in, students started posing their own problems. Many started to pose problems around designing seating arrangements to meet certain criteria:

I have a lot of curricular freedom with these students, but this problem would be a good one to practice the Pythagorean theorem. I introduce the idea with the simpler Road Building task, and then solidify knowledge with this one.

One student asked what would happen if the can didn’t have to be on the floor. You should have heard the groans as we pursued this latest instance of “broken math”.