One of the coolest experiences in my university training was the opportunity to invite a kindergarten class into our mathematics methods class for a mathematical field trip. Our class was divided into groups of three or four and were given the task of designing a mathematical activity that the students would try. The afternoon was a hit. Each group set up shop around the room and the kids freely moved from station to station as they mastered each activity.

Somewhere along the way, mathematics becomes formalized and stationary. I imagine it is around the time of fractions. I assume this for no better reason than teachers and students alike seem to blame most of their problems on fractions. That is until Grade 10, when polynomial factoring squeezes out fractions as the most hated mathematical procedure.

As a mathematics teacher, I hope to engage my students in meaningful mathematical discourse. I would like to think that any of my colleagues would love to do the same. In fact, that desire is the driving force behind a sweeping curriculum renewal in my province. Try as I might, these discussions are very hard to have–mainly because they are very hard to initiate. Conversations don’t naturally happen between a person standing on a stage and a single voice from a group of listeners. Conversations occur between two people on a level playing field. Incorporating a station model into some of my lessons has created the necessary shift in classroom ecology that enables deeper and more fluent mathematical discourse.

The system doesn’t need to be complex. Four to five stations each consisting of a different variation on a task. Each student is given some kind of a recorder form, and told to use a set amount of time to get all the entries filled out. It is very free-flowing; students will decide where to start and how to efficiently move to save time. It frees up plenty of time for the teacher to sit and wait for each group at a single station, or move around with them while engaging each group in a conversation around the particular task they are working on.

It creates an active environment. Students are physically shifted from their regular mathematics experience. It sounds trivial (and chaotic) but a change of scenery can work wonders. Stations create an opportunity for a variety of grouping and teamwork situations. Students will most likely begin in pairs but will eventually diffuse around the room as certain students finish quicker than others. It means that new students are coming in and asking questions about the new task at hand. Students naturally take positions of leadership and follower as they travel. The segmented groups (so common in high school) soon become more of a milieu. The framework also allows for grassroots conversations to take place. The teacher asks questions at various points of the problem solving process. In some cases, the task feels quite new to the student and they need to begin the process. In others, they feel they have a solution and the teacher can ask for a verification or provide an extension. The teacher takes on a conversational tone. Finally, stations allow the teacher to present a variety of problems at once. This variety (usually centered around a common theme) opens up comparative thinking. Which task was easier? Why? How was station two different from station four?

My first rotation was a surface area rotation. I placed different objects around the room and had students measure and estimate their surface area. Kleenex boxes, chip containers, nesting jars, and a perfume bottle were all included, but I quickly removed the perfume when the boys began spraying each other. I did the same format with volume the next week. Grade Nine students learn netting composite objects with cube stations. Different arrangements of cubes are set around the room and they record their nets on dot paper. A simple way to pinpoint which students need specific help, and challenge those who have the concept. 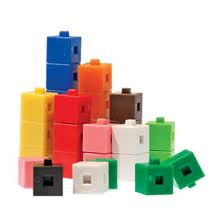 I have also placed various probability questions in stations. The little nuances between the problems cause a wealth of conversation. Next week I am trying a new format for the first time. Students will travel to stations with a Venn diagram structure. They are given ten cards from the game of SET and asked to place the cards in the correct sections of the Venn diagram. They then take a picture of their solution, reset the problem, and move on. The stations are specially designed to include disjoint sets, subsets, intersection, and union at varying points.
Stations provide a shift in environment in the High School classroom. They are relatively easy to assemble, cover a large variety of topics, and open doors for mathematical communication. Those types of benefits shouldn’t stop after kindergarten.
NatBanting