Set Theory, Counting Methods, and Probability are probably my three favourite topics to teach. For the first time under our new curricular framework, I got to teach these topics to a group of seniors. I decided to build up large themes and understandings through introductory tasks; my goal was to create an “unflippable” entry point where students could work together to complete tasks and filter out necessary details such as rules, notation, etc. I began our study of Set Theory with this task.

The students were introduced to the idea of what a set is. They also were given some elementary verbiage. I wanted them to become comfortable using words like set, subset, and disjoint throughout the task. I did not introduce them to the idea of intersection and union–those were to be formalized through the task.

The day before I rolled out the task, I showed them some Venn diagrams. Many of them had seen them before and we had fun deciphering their meaning. Never did I use the words intersection or union. Students naturally asked about overlap and exclusion though. I just went with the flow and brought up those questions in the classes that followed. 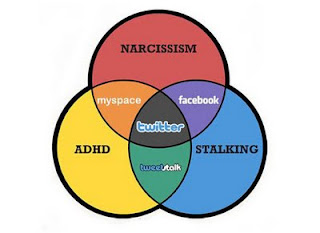 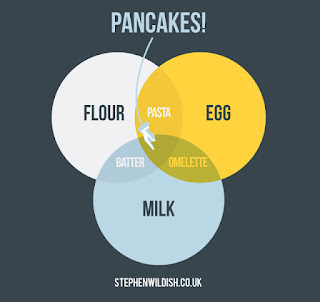 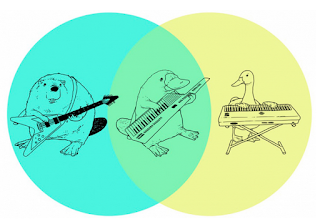 When the students came into class, I asked them to get into groups of 3. Each group was given a large piece of paper (from the SRC room) with a blank Venn diagram written on it. The diagram had three sets all interlocking–this is the most familiar look to students and I wanted to begin within their familiarity. I stood at the front and introduced them to the cards from the game of Set. 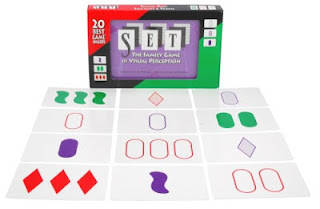 For those of you who have never seen it, it is a game with cards that have four attributes–Shape, Number, Shade, and Colour. Each attribute has three options. After a short introduction, I handed out 10 cards to each group.
Soon students wondered what they were supposed to do. I made sure to take my time circulating with the cards because I wanted to see how students would begin to organize them. Most primitive structures were based on number and colour. After two minutes of stalling, I began to circulate again writing an attribute inside each set on the Venn diagram. I was sure not to double up within one category (i.e. Red and Purple) in the first round. Students were asked to sort their cards based on the new information.
The circulation allowed time for each group to finish. When I returned to a station, we pointed out some trends in the sorting. Some students didn’t like the fact that many of their cards didn’t fit into a set; that led to discussions of the universal set. Other students provided a very concise argument for why they were correct. I took mental notes every time the words and, or, & not were used.
After discussing with all groups I asked them to take a picture with their phone and flip their paper over to a blank side. I then circulated and gave them three new attributes. This time I was sure to double up one of them (i.e. Hollow and Shaded). They needed to draw their diagram and then place the cards. Not surprisingly, many groups traced the pattern through the paper and began.
On my circulation, all but one group needed to discuss disjoint sets. How can the sets be arranged so that only possible sets exist? What is the difference between an empty set and impossible set? All good conversations to have. groups began to re-draw their diagrams. I asked the more advanced group if they could find any subsets among their cards. That question took them a lot of thinking.
After round two, groups had two pictures of their work: 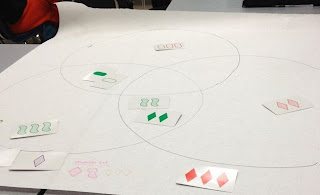 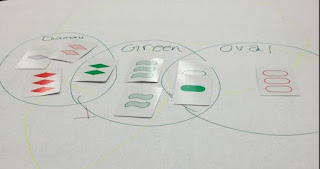 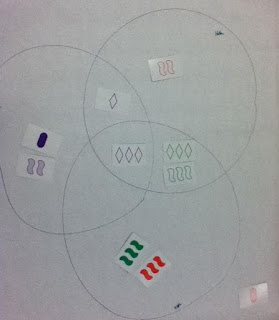 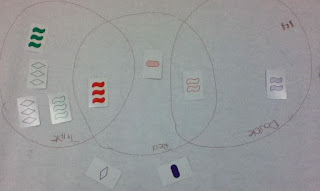 For round three, I projected some groups’ work and we began naming the different sections of the diagram. The words and, or, & not came up again and pieces of notation were introduced. At this point, the students had gained a deep understanding of the sorting process and notation was just a formality.
The activity anchored the whole unit. When discussions of the principle of inclusion and exclusion came up, we could go back to the archived images and discuss options. It provided me (and the class) with a deep starting point that grew with the topics being addressed.
A student came in the next day and confessed that she actually had fun during the activity. After realizing what she just said, she looked at her friend who reassured her that she also understood the concepts for the first time. The whole conversation was one of those “jump-for-joy-it-actually-worked” moments. If you were to look at their binders, all the necessary notes are there; we covered all the definitions and rigor necessary to move on. We accomplished all of this with the added bonus of student productivity and engagement.
NatBanting

I love this activity that you described! I really appreciate how you've worked in an opportunity for the students to work and learn together, while also frequently conferencing with you. I think that this small group and guided time is so important when it comes to math. I really try to do this as well, but sometimes I struggle with giving all of the students the amount of time that they need. How do you balance your time with the individual groups? I'd love to hear some of your thoughts!

@adunsiger I never spend too much time with any single group. It is more advantageous for me to stop in for little summaries and with little probing questions than to stay for long periods. That way it keeps all thought flowing. It becomes a challenge to remember what each groups had as a thought, but that gives me an excuse to have them recap.
Advanced groups get extensions, slower groups get scaffolding toward success. Usually questions can be repeated from group to group–lots of overlap.
Thanks for reading!