The grocery store is a brain workout for the mathematically inclined. Not only do the varying metric and imperial conversions tease out the micro-savings of bulk, but neon yellow discount signs encourage percentages and good ole’ multiplication tables. Often you find adults transfixed in a complex division trying to figure out which ham will be cheaper. Once that calculation is complete, they turn their attention to making sure the portion will be enough to feed their whole family. The sheer volume of available estimations overloads me; coupons just complicate the matter–significantly.

When you add the typical male intolerance to shopping, grocery stores become the closest thing to hell on earth for me. This condition has been worsened over the years by the free sample shortage that seems to be sweeping the nation. I guess we are in a recession. I found myself somewhere between the frozen meats and fresh produce when my wife posed a problem. Bless her heart; she knows that a few cognitive laps help pass the time. She gave me a coupon and asked me to go get the laundry soap. Although long journeys to the Dairy are my usual forte, I accepted.
She told me that the coupon was for Purex detergent. Upon further inspection of the aisle, the product came in three sizes; each size was measured in “loads”. For simplification reasons, the detergent companies have coined a new unit of measurement–the load. No longer do humans have to toil in fluid ounces or milli-litres. With this in mind, the task became simple:
Using the $3 coupon, which denomination of detergent was the best deal?
I stood there transfixed–very similarly to the ham-haze mentioned earlier–until I reached my conclusion. My trance was elongated by a re-evaluation of the numbers, because I could not believe my conclusion. Upon further rationalization, it makes sense, but it came as quite a shock amongst the toilet paper and facial tissues. Let’s first define the problem a little more: 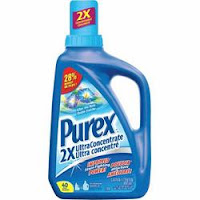 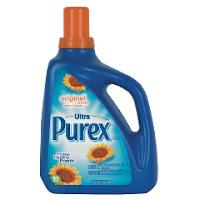 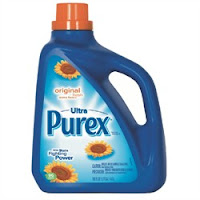 Bottle #3 – 96 Loads
$12.97 before coupon
Like every good grocery shopper, I kept the first rule in mind: bulk is ALWAYS cheaper. Initial calculations (in my head) didn’t refute this conclusion. I correctly estimated the 40 load to be more expensive per load than the 96. If this is where the problem finished, I would have remained un-astonished–but it didn’t.
When the coupon was added, it seemed that the calculation switched. The 40 load mysteriously become far cheaper per load. I re-estimated 3 or 4 times to make sure I was correct before returning to my wife. I spent the next 5 aisles convincing myself. When I got home, I made the following chart with the help of my calculator:
Size|Original (Cost/Load) | After Coupon (Cost/Load)
————————————————————————–
96 Load|$.135|$.104
————————————————————————–
64 Load|$.134|$.087
————————————————————————–
40 Load|$.144|$.069
————————————————————————–
There are two surprises:
1) It is actually cheaper to buy the 64 loads than the 96 loads.
2) The 40 load jug is the cheapest when the coupon is applied.
The first is just an entertaining observation. It would be interesting to see just how many shoppers bought the 96 load jug because they thought it must be cheaper. The difference is so minuscule (a tenth of a penny per load), but still creates another niche for numeracy in society. The second surprise creates a very interesting math discussion. Why does the coupon change the cost per load in favour of the 40 load jug? Posing that question to students would create a very interesting discussion.
Try and answer that for yourself. Did you see that coming? Where do the savings end? The elementary divisions open up discussions of average and even functions. My question was this:
What if I needed to do 300 loads of laundry? Is it still cheaper to buy 40 load jugs with the one coupon?
Why stop at 300? Seeing as the 40 load is only super cheap for a short time, then there must be a point where the 64 and 96 load jugs catch up in efficiency. How many loads will it take before it is more sensible to buy all 64 load jugs? all 96 load jugs? I set up functions for each relation, and graphed them on the back of my page. It was a great teaching point to see how the slope of the line changed when the initial “coupon jug” ran out. Each line got steeper because the cost per load increased.
So what’s the big deal? The lesson here is that there is very interesting mathematics contained within mundane human exercises. Continue to fiddle with the problem; pose further questions!
What is the maximum coupon that keeps the 96 load jug the best deal?
What if we had more coupons?
Would it ever be a better deal to buy 96 load jugs over 64 load jugs?
What combination of jugs is the cheapest way to buy 10,000 loads?
How many coupons would you need to lower the cost per load to a specific amount?
How much should a jug that does 137 loads cost? (this is trickier than you think)
You have one coupon. Devise a general algorithm to get the cheapest ‘n’ loads.
What would prices act like if they were devised linearly, quadratically, logarithmically?
etc.
I can see this activity going on for 2-3 days in class. What a great way to cover averages, equations, proportions, unit conversion, percentage, sales tax, and consumerism. My answers have been intentionally omitted from this post in hopes that you too tackle some situations and pose further ones. They say that teaching is a 9:00-3:30 job. That may be true, but it is a 24-7 profession. Some of the most engaging and perplexing mathematics lessons are lurking somewhere amongst rotisserie chickens and contact lenses.
NatBanting

5 replies on “The Mathematics of Laundry Soap”

This is a fun, counter-intuitive results that could really spark student interest. Great catch!

A simple and elegant problem-solving technique can be applied here to help understand why this is happening: consider extreme cases. If the coupon were for $5.76, which bottle would have the lowest cost-per-load?

The answer is to buy the size that you will use up just before the next coupon comes out. You get $3 off no matter what and then you will have a new problem the next time.

Or split up and go through the line as many times as you care to with a coupon each time with the 40-load size. Since the stuff will never go bad, this is the best bet. Bring both kids and do this twice. That'll get you 8 40-load bottles for cheap.

mrhonner: That was exactly my thought pattern. Essentially, there is a far greater effect for a far fewer number of loads. You could begin with a small coupon ($0) and move to a large coupon ($5.76) and have the students see when the jugs are the same deal. Or begin with a small # of loads and move to a large one calculating the same effect. This is essentially tracing the function.

Curmudgeon: we have to be careful saying that "The answer is". Creating loopholes is a student's best friend. I would address your solution as entertaining and then challenge it. What if the soap did have a expiration date? What if a coupon comes out every 110 loads? What will you do with your residual? How would your buying chance to make sure your leftovers don't go bad?
Thanks for your strategy. As for 9-3:30, must be a Canadian thing? Where do you teach?
NatBanting