It is very hard to develop an active atmosphere in a math classroom–especially at the high school level. I believe there are two main reasons for this: 1) Students have been slowly trained throughout their schooling that a “good” math student is one that listens, absorbs, and repeats. 2) The content often reaches beyond what most teachers deem to be “constructable”. Rather than fight with these two restraints, I began my implementation of Problem Based Learning in a class with manageable curriculum content filled with students who never learned to sit still in the first place.

As time progressed, the room slowly took the form that best suited the class. Skills were introduced with complex, engaging problems and worked on in a collaborative setting. As the basic skills with the content and various technologies were honed, I moved them into a more open-ended, project-based setting where they needed to mix initiative, critical thinking, and problem solving with their new found content skills to create rich mathematical experiences.

My role changed to that of a half-time tech support guy and half-time interested observer. In between battles with the unreliable wireless internet connections and antiquated laptops, I had chances to enter into discussions with students about their approaches to the tasks. More often than not, students find a familiar path and stick to it, but the best thing about the extra Independence of PBL is that students who are ready to expand have the freedom to pose new problems and search for solutions. Every so often a student will question the status quo, and it always leads to student empowerment.

There is nothing quite like the look on a student’s face when they realize that they have discovered a possible caveat or extension in a project or prompt. They are far more likely to take on a challenge that they create; the project setting opens up room for student problem formation.

I have a student in my class that took a modified pathway until Grade 10. To be honest, I was weary of putting her in such an independent environment. She recently provided the greatest moment to date in one of my PBL focused classes.

We were working on a very structured series of problems entitled, “Centimetre Cube Exploration”. It required the students to answer a variety of questions on surface area using ordinary centimetre cubes, GeoGebra, Microsoft Word, and Google SketchUp as their tools. A full handout can be downloaded here.

She had needed lots of support through the first few questions, and had landed on the question asking her to construct a 10-cube structure that had the maximum surface area. We talked about what caused the surface area to shrink. We developed the idea of overlapping sides, and how fewer overlaps meant a larger surface area. This was all great learning; this was the learning I expected. The great thing about the new ecology of mathematics I have developed is that I don’t always get what I expect.

Shortly thereafter, the student approached me with a 2-cube design in hand. It was simply two cubes stacked on top of one-another. Sensing another mundane fix, I rolled my chair over and she asked a question that made me look like a fool.

“Mr. Banting, you said that this was the maximum surface area two connected cubes could have, right?”
She then showed me the cubes which looked like this:

“… but wouldn’t there be more surface area if we did this?”
She then simply twisted the cubes to look like this:

The look on my face must have been priceless, because she started to laugh. The scene went on for quite a while. Slowly but surely, every student had approached the desk to see what was up. The student beamed as she explained how twisting the cubes made eight additional triangles to measure. After about 10 minutes, I re-routed her efforts back to her work and began to calculate the additional area myself.
I modeled the two images above on the same software the students were using, and created this cross-section using GeoGebra: 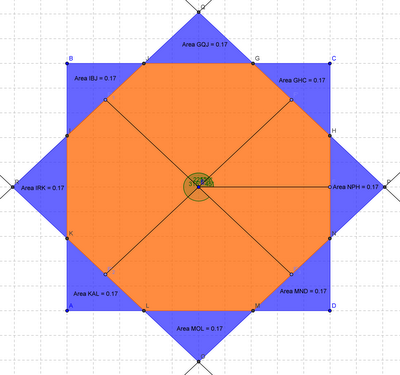 From there I used linear equations, isosceles triangles, regular polygons, area geometry, and elementary trigonometry to find the exact area of the eight new pieces of surface area (coloured purpely-blue above). I used GeoGebra to verify the results.
I used the epiphany in two ways. The students who were nearing completion and needed enrichment were commissioned to find the missing area. Those students who were still struggling through the original task were shown the conclusions when they were complete. The experience meant something different for every student. Some saw it as more work, some saw it as a chance to solve a difficult problem, and some saw it as a launching pad into more questions.
For me, it was a chance to feel like a student again. Providing a space that encourages students to be creative always ends up in unsuspected surprises, but some of my richest moments as a teacher are those in which I don’t feel like the teacher at all.
NatBanting

One reply on “Unexpected Lesson Extension”

Wicked. I love when students take me to school, open up a new extension problem, and I end up wishing I had an extra 20 minutes of class. And you handled it like a champ, well done.