There is a very strong emphasis on linear relations and functions in the junior maths in my province. In Grade 9, students begin by analyzing patterns and making sense of bivariate situations. The unit–which I love–concludes with writing rules to describe patterns and working with these equations to interpolate and extrapolate.

Grade 10 students continue along this path in the light of functions. There is a large degree of abstraction that occurs in a short amount of time, and droves of students abandon the conceptual background (pattern making) in favour of memorizing numerous formulas. (Slope formula, slope-point, 2-point-slope, slope-intercept, etc.)

**Some (much prettier) quadratic patterns, which are introduced in 11th Grade, are posted here**

For the record, I do not think that the transition between pattern sense making and formal function work should be made between grade levels. It is an unfortunate result of our curriculum structure.

Last semester, I worked a lot with visual patterns and group tasks. I began numerous classes with Fawn Nguyen‘s “Visual Patterns“. We started with ten minutes, and by the end of the unit, we were making sense of several patterns within five. It served as a great warm-up or wind-down to a lesson.

We also undertook several #3Act pattern activities. The class favourite was Dan Meyer‘s “Toothpicks“.  After they got their head around the fact that someone would “waste” all that time arranging toothpicks, there were several ingenious ways of making sense of the situation.

In fact, I noticed a distinct increase of strategies with the 3Acts approach. I started putting visual patterns into a stations format, and class participation increased. Students were creating patterns in novel ways, but still using very similar strategies to decipher and model them.

I was stuck–until a student made a comment to me during a station activity:


Me: “We know where the pattern starts, but how does it grow?”
Student: “It doesn’t grow at all; it just repeats itself”

Right then I realized why it was so hard for students to describe growth, because the patterns were not growing. They were presented in stages on paper; paper–a static medium–has an incredibly difficult time representing growth.


Paper had reached its natural limitation.

Some students just couldn’t visualize the representation as a single, growing pattern. They wanted to see them as separate, and who could blame them? It makes much more sense conceptually to create a model that describes growth when you can see the growth occurring fluidly.

Here is my modification:

I began with the two problems from my textbook that I used with the inaugural relation stations (linked above). 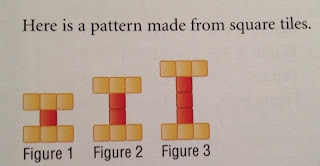 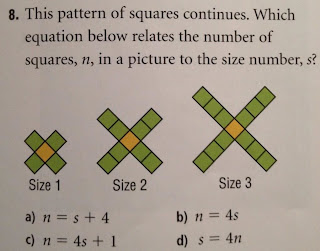 and used Vine to animate the growth that the textbook is trying to symbolize.
**Update: Vine has since gone the way of the dinosaur. I downloaded all the animations I made (some of which are linear patterns) and placed them here**

The short clips make use of colour and movement to animate the qualities of a linear relation. This is especially true for the rate of change.

Here are three of Fawn’s patterns animated with Vine:

The growth movement that these videos show may not be the pattern that the student was envisioning. This can result in larger misconceptions.

In cases where the pattern may be complex enough to entertain multiple patterns of growth, the teacher should first show a static pattern and ask students how they see the pattern growing as the stages progress. This activity holds the potential for rich classroom discourse. Students could use colour, shading, or prose to describe and illustrate their thinking. Only after the students have had time to visualize the movement, should the teacher show some animated patterns and begin working toward an equation or function to describe the growth.

In this case, several patterns may be anticipated and animated to show several avenues of thought. This takes careful anticipation on the part of the teacher. Here are two anticipated growth patterns of another visual pattern:


Great lessons meet students at their current level and provide the milieu to move them forward into deeper understanding. Animating the growth of patterns enables students to “see” the growth and make better sense of patterns when they are presented in stages, words, or in the world around them.

@Jennifer
You have some interesting animations. I'm interested in how they could be animated in a class that doesn't have access to personal technology.
I personally love the simple things that can be animated to make students ask questions.
GeoGebra and Desmos slider applications can be used as a second step to investigate questions and solidify connections.
Thanks for reading.

Nat, I'm only seeing the first step to your patterns. Do I need to download Vine to watch the animation?

@Susan
I don't think so.
There is no download for Vine–it is strictly app based.
Click on the animations, and it should take you to a new page. Maybe that will work.
Thanks for reading.

Love this and I think you captured something in that you can't show them an animation too soon as you lose the variety of ways students 'see' the pattern growing. I have used the app Show Me as an intro to the problem and then to hear how different people saw the pattern. As each group or person describes what they saw, we later wrote the generalized formula for how they saw it. To listen to how students see things and abstract from that is very powerful.
Thanks again for the post as I like the animations where you change up how you build the growing pattern.
http://www.showme.com/sh/?h=WHTAxRg
http://www.showme.com/Lisa-Eberharter

Nice guide! Thanks for sharing. I like how you use Vine to make blogging more animated and interactive.

@Lisa
I like the simple patterns to begin with because most students will "see" the same pattern of growth. Showing them these at that time will create a moving framework that they can use to decipher other patterns.
By the time patterns can "grow" in different ways, the students have fully established the visualization of growth.
Thanks for reading