A while ago I wrote a post on embedding atomic skills into tasks so that the basic skills are developed and used as tools of mathematics rather than the ultimate goal of mathematics. I try to develop tasks that follow this framework. I want the student to choose a pathway of thought that enables them to use basic skills, but doesn’t focus entirely on them.

Recently, I was reading Young Children Reinvent Arithmetic: Implications of Piaget’s Theory by Constance Kamii and came across one of her games that she plays with first graders in her game-driven curriculum.

The game was called double war. Each child got two piles. Each turn consisted of both players turning over a card from each of their piles for a total of two cards each. They would then decide who had the highest sum. This game–although powerful for first graders–holds little value for my high school students. I got to thinking how I could capture the spirit of the game as well as a relevance for the grade nine and ten range.

I wanted to stick with the “war” theme. I also wanted students to decide whether numbers were larger or smaller. I also thought I would target fractions because they present my students with perennial difficulty. The bulk of the task would be completed in pairs.

I strategically chose a series of numbers between one and ten. The goal of the task is for the students to create an “army” of fractions (so to speak). The army needs to consist of the largest ten fractions possible. (they are given 20 numbers total). That goal is designed to create discourse within and between groups. 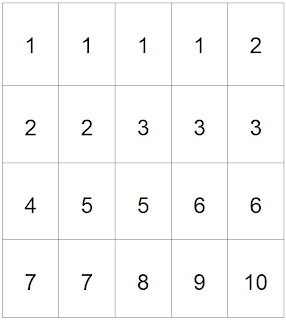 What makes an army the largest? The sum of the entire army is the largest possible? Maybe two armies are compared on a fraction-by-fraction basis? Each army could send out their champion and they could battle.

To further increase discourse and challenge, I added two conditions to the army creation:

The task is delivered to the pairs in three stages. Each stage has an accompanying handout. For convenience, I have linked this post to each handout as a Google Doc.
Stage 1 – Entry
Each group gets a copy of the Playing Cards. The handout includes two copies of the twenty numbers. In stage one, I want students to begin to discuss how they will approach the problem. Nothing is formally recorded, but I am sure to stop by and pick the brains of each pair. Even in stage one I am hoping for the discussion to bleed between groups.
Stage 2 – Formalization
I give each group a copy of the How To… handout where they are required to talk through their strategy to create the strongest set of ten fractions. I really encourage students to work with the restraints that they are given. Mathematics is about sense making around a set of parameters. Here, students should use the fact that no two fractions can be identical as proof; relatively prime numbers should become a logical truth in their arsenal. This stage usually lasts fairly long. I am sure to gather main ideas from groups as they write. These carefully selected and sequenced ideas will become the basis of a class discussion.
Stage 3 – Extension
After a class discussion, I give each pair an Army to Beat handout. If your class is short, this may end up being a take home assignment. It would be a great one for students to pull out after dinner with parents. Here, students are asked to design an army that “beats” a carefully pre-designed army. Again, their interpretation of “beat” is important. Some may match up fractions mano-a-mano while others will justify based on a global sum. Both hold important mathematics.
The goal of the task is to get students thinking about how fractions work and what they mean. I want them to get a deep understanding of what happens to fractions as their numerators get smaller or their denominators get larger (or vice versa). I want them to realize that fractions are a composition of numbers and they have a spot on the number line like other numbers. All of these deeper, more robust learnings are bolstered by the atomic skills of building, comparing, and adding fractions. Hopefully these things are all captured within Kamii’s framework of autonomy provided through self-directed games in math class.
NatBanting

Students have trouble with fractions all the way up. This looks like a fun way to deal with that. I wonder if I could use this with my precalc students.

Great idea! Could be interesting in a later stage to restrict only to proper fractions (or to improper fractions)… and to consider whole fractions as reducible, thus requiring the use of 1's only in the 1/N form.

@Sue
I wonder if the learning here would make a good intro to limits. Students should figure that larger numbers in num/denom change the size of the fraction in specific ways. What if these numbers went to infinity?

@Da-ud
Thanks for the comment. I think you will find that as the activity progresses, certain students will try and bend rules. I would allow it, if you envision valuable mathematics falling out of them.

[…] with novel or less-familiar mathematical ideas – or, as Nat Banting (who does this so well) describes it, “embedding atomic skills into tasks so that the basic skills are developed and used as […]