Twenty-fifteen will be the fifth year that my little corner of the blogosphere has been dedicated to digitally curating my own thoughts and experiences regarding the teaching and learning of mathematics. It represents a wide array of posts regarding a wide array of topics. Much has changed from new teacher status to graduate student, and the posts reflect that. Still, the heart of its posts and pages is pragmatic: I write about classroom events that seem to matter (for some reason or another, they catch my attention) in hopes that other teachers might find the same phenomenon.

I am going to call these episodes: bloggable moments.

This post is inspired by Geoff Krall‘s, Math Blogging Retrospectus in which he (non-exhaustively) curates his favourite posts from the year. (This would be a great space to start if you are interested in starting somewhere in the online math-ed mess). While we are on this nostalgic walk down memory lane, Geoff was one of the first to offer support to me–a new teacher–when I sought it through the #MTBoS (Math Twitter Blog-o-Sphere). I was lucky to happen upon him, and I hope to offer that same support to others.

When I sat to compile my own list of posts, I couldn’t erase this thought from my head. I was lucky to gain “access” to the online world of math educators. There is no membership (so to speak) but there is a prevailing understanding that resources are powerful currency. You are measured by the tasks you present, good questions you offer, extensions you have, comments you leave, and day-to-day novelties you provide. It is unspoken, yet existent. I imagine it creates much the same effect as the “closed-door phenomenon” (where teachers crave solitude out of insecurity) or the “only/just phenomenon” (when teachers constantly qualify their lessons as only lectures or just drills).

This skill is growing in importance as teaching blogs become mainstream. I think it is safe to say that this is well established in 2015 by the incessant focus on educational technologies as well as the emergence of figureheads (none larger than Dan Meyer). We tend to place blogs outside our normal human experiences. They exist as edifices of perfect practice–of master teaching. The author has full creative control, and this robs you (the reader) of the opportunity to see the full picture.

Posts (deemed bloggable) are only instances in a constant distribution of interactions we call teaching. Without the frame, it gives the impression that there exists a teacher that operates in a bloggable state at all times. This is discouraging and delusional.

By way of framework, I’ve illustrated a number of possible distributions of day-to-day teaching and their relation to blogs. It is my hope to re-cast your impressions of the nature of bloggable moments before you go read the “best of the best” from 2014, and hopefully create your own posts.

This is probably the most damaging perception of teaching on the blogosphere. Here, the horizontal axis represents a passage of time or flow of semester. The vertical axis is the strength of classroom event. The red rectangles illustrate the instances that a teacher would deem bloggable and present to readers. (If teaching was indeed uniform, any random instance could be labeled bloggable; if such uniformity was ever reached, I would worry about either the teacher’s impression of success or tendency toward pathological lying). In this case, the reader is given the impression that because all they see is top-notch teaching episodes, then this must always occur in that particular blogger’s classroom.

A favourite of mathematics teachers. Now, the horizontal axis represents the strength of classroom event (maybe coining the term bloggability is too much for now). The vertical axis counts occurrences. If we take blogs to be representative of the blogger’s entire practice, then the reader (if they subscribe to this distribution) may be led to believe that the posts are indicative of the most common lessons, tasks, or prompts. An event is bloggable because it (or similar ones) occur often. This takes an important step away from the uniform distribution, but still sends the impression that in order to be a good teacher, events like the ones detailing master teaching must be the norm in your class.
The Power Law Distribution 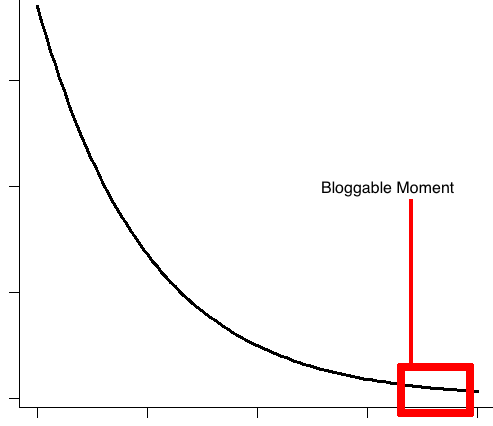 Probably the most accurate description of blog posts if we are going to work from the assumption that classroom events occur in relative isolation (as many–if not most–blog entries do). Here the axes retain the same representations as the normal distribution, but the bloggable moments no longer represent the most frequent (read: average) events, but those deemed to be the most potent. It is comforting to understand that those events with the most potency occur with the least frequency. Such a phenomenon is not unique to the classroom but lends itself to earthquakes, market fluctuations, and epidemics (Davis, Sumera, & Luce-Kapler, 2008). If you settle with this distribution to frame your reading, it wouldn’t be the worst thing in the world. (It also wouldn’t be the best…IMO)

I have two problems with the above distributions.

First, as mentioned above, these assume teaching happens in segments each loosely tied to a block of time. While many blog posts detail bloggable moments that carry projects, orientations, or themes intended to transcend these boundaries, teachers still think in this unit of currency: the lesson.

Second, any teaching event occurs in a context–an ecology. Most of the time, bloggable moments occur in classrooms, but many posts present situations from home life, theorized classrooms filled with theoretical students, or everyday life (intended, of course, to bridge into a classroom). Some just provide contextless problems, tasks, or prompts–possibilities to be moved into a context. This means that bloggable moments don’t represent a ready-made parcel of teaching, but a rich culmination of interacting forces. Try as we might, it is impossible to entirely relate the context to the reader. In order to be documented, a bloggable moment must be ripped out of context–disconnected from experience. 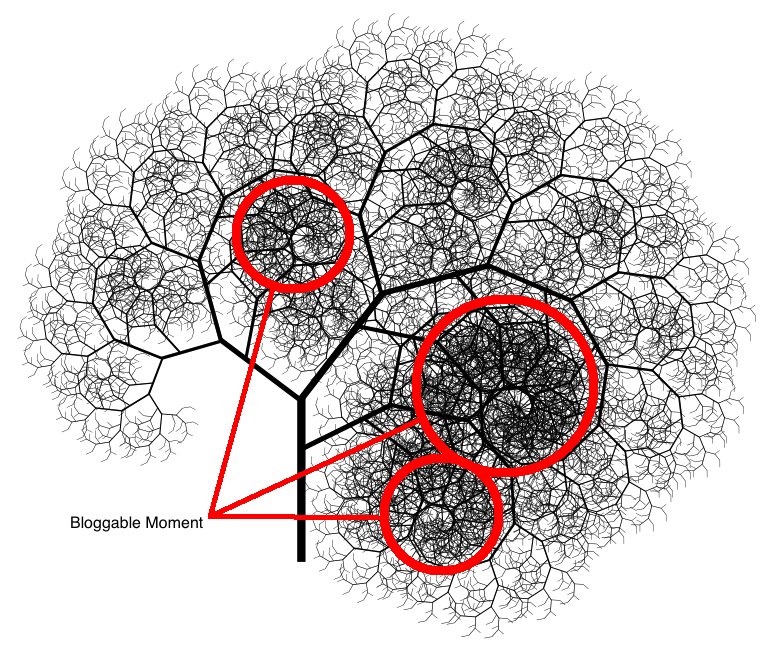 In the fractal image above, there is no scale (in fact, it is self-similar and scale independent). The simple governing rules create a rich pattern of interactions. Several of these patterns grow darker as they begin to attract more activity. This is a visualization of a complex classroom. The circled areas are the moments that may stand out as bloggable. Notice how they must literally be pruned out of the tree-like structure of associations, connections, and knowings.

Good teaching is less about the judgement of “ineffective vs effective” and more about being connective. Don’t read blogs thinking that what the blogger has deemed successful was pre-planned in that exact form. Teaching is an action; allow it to be such.

The fractal image reminds us that a classroom is a complex system and judging task/lesson/prompt/learning success is more about attuning oneself to the clustering of connections rather than attaining chunks of currency in the form of bloggable lessons. The moments that you see strewn around the #MTBoS are those that caught our eyes or, better put, our imaginations. They occur within our classroom ecologies and with our students. Every system is unique. We can talk about how we attempt to encourage such clusterings–and I do believe there are attributes that encourage emergence of these attractors–but in the end, it is your class.

The influence of online collaboration in mathematics education increases with each passing year. In my opinion, the volume of material has exceeded the ability of situated consumption. These distributions are one way to frame our consumption, and hopefully encourage more to try their hand at creation.

One reply on “Bloggable Distributions: Reading #MTBoS Blogs in 2015”

Interesting post. Despite having been a reader of blogs for a little while, I am a relatively new blogger. I appreciate your take of the nature of posts in relation to how we interpret them. As you mention, math education blogging and online influences are increasing at a rate that is too fast to keep up with. As a read and came upon the Power Law Distribution, I thought, that showcases my blogging experiences! But continuing to read and seeing your "bloggable moments" as instances interconnected to countless other forces inside the classroom, as depicted in your fractal distribution, it took my level of awareness to a higher level. I do find myself blogging about forces and ideas that exist outside my actual classroom (like a book, for example) – and whose impact on my classroom is tangible and incredible. It would be interesting to contemplate how these sorts of "outside" influences tie into this perspective as well. Good write up!