Skip to the content
Baseball is mathematically based. It is the best link between the generally nerdy domain of mathematics and generally manly domain of professional sports. The one downside to this statistically driven machine is that the stats can be selected and used to benefit almost any argument proposed. Major League Baseball keeps such extensive records of stats, that there is always an obscure one in support of your argument. Right now the league is in an uproar over the Toronto Blue Jays sign stealing controversy. Some anonymous players claimed that the Jays were stealing signs with a 3rd party and that effected the amount of home runs they hit at home. In an article by ESPN, they use the personal witnesses’ accounts to bring up the topic, but claim that:
“Colin Wyers, a contributor to ESPN Insider who writes for Baseball Prospectus, provided independent analysis that showed statistical deviations in Toronto’s hitting stats that he considered too great to be random chance.”
If you want the full story visit the original source. This post will make much more sense if you do. Take note on the statistics used, and how convincing they are. You will be hard-pressed not to believe the story. When you are done, come back here and read this; hopefully the same effect occurs. The goal of this post is to selectively use statistics (much like Mr. Wyers) to make a very convincing case, and to show the dangers of a statistically driven world. There is a public myth that mathematics is completely objective–numbers don’t lie. In this case, the numbers themselves don’t lie, but they may or may not contribute to one.
Link: ESPN’S Article 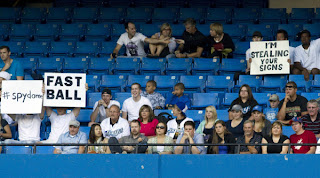