I was given a section of enriched grade nine students this semester. I decided very early on that the proper way to enrich a group of gifted students is not through speed and fractions. They came to me almost done the entire course in half the allotted time. This essentially alleviated all issues of time pressure.

The beautiful thing about this is we are able to “while” on curiosities that come up during the class (Jardine, 2008). I am not afraid to stop and smell the mathematical roses–so to speak. In a recent tweet I explained it as the ability to stop and examine pockets of wonder. This has been a blessing because our curriculum has become far less of a path to be run and more of the process of running it.

We do introductory tasks each day to get our minds thinking mathematically. We started with various estimations and have since moved into a series of numerical flexibility tasks. Here, I write a problem on the board and they are to give me the exact answer. Only two rules:

I am careful to always write these problems horizontally, because vertical alignment is too tempting. A typical problem might look like:

5 x 38
15% of 420
The students have done remarkably well working flexibly. I have them thinking outside the standard methods they have been so successful with.
One recent flexibility task highlighted subtraction. In the midst of students explaining their strategies, two very fruitful things occurred.
One student became frustrated with the banishment of algorithms.
“How do we know if we even used an algorithm?”
I re-directed the question to the class and the response was very cool. We settled that an algorithm had three characteristics: a set structure, easy repeatability, and stability (what I called robusticity).
With these three characteristics in mind, we collected solution strategies. There were only two. First, a student explained how they separated each place value and subtracted corresponding numbers. As he got answers (3000 – 2000), he kept a running tally. In the end, the tally after the units digit was the answer.

The second student separated each digit into a subtraction problem and then stacked them on top of each other and performed the final subtraction after all four were isolated and completed. It was at this moment that I pounced and provided an alternate algorithm. 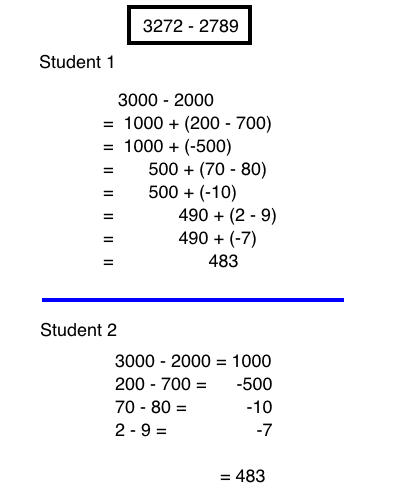 What if we just combined these numbers back into their original place value and if they were negative, we would represent it with a bar over top. I showed them the familiar addition algorithm and the response was immediate. 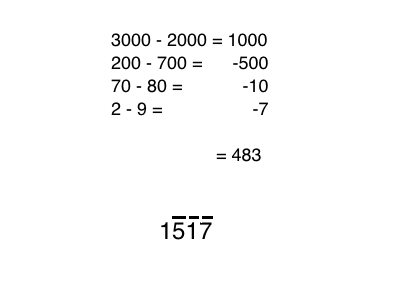 Many wanted clarification, and others chimed in to explain. Others wanted to know if they can use this for the rest of their assignments. I told them if we were going to use it, we better develop algorithms for counting and the basic operations. I set them into groups to decipher them.

Algorithmic language came out right away. Things like, “add a zero on the left” and “reset the far right column to 9 nought” (nought was our verbal way of reading the bar notation).

For two days we wrestled with the possible algorithms; when they are polished by the students, I will post them and link from this post.

From the outside, this task seems like a colossal waste of time. The classroom was thrown into chaos as the students worked to re-align their worlds after this major perturbation. From the inside, it showed my students the value of algorithms if they are understood. Something that these students have abandoned in favour of guaranteed right answers. Aside from the natural engagement that speaking in these numbers provides for this class, it does illustrate the fact that “knowing why” it works is a prerequisite for “knowing that” it works.

P.S. After the fact, a student used “nought” notation to give an answer in class. Another classmate noticed that the number (in this case 36) could be represented by a different nought notation number. I then had the class work to find out how many ways each number could be represented in our new notation. The results (purposely omitted here) were quite surprising.

Jardine, D. W. (2008). On the while of things. Journal of the American Association for the Advancement of Curriculum Studies, 4.