The experienced hockey fan will recognize the title of this post as a reference to Bobby Hull, who was a legend with the Chicago Blackhawks before coming to the Winnipeg Jets in 1972. He became one of the biggest draws in the fledgling WHA; his blinding speed and rocket shot gained him the nickname “The Golden Jet” league-wide. The Winnipeg Jets folded in 1995, and only returned weeks ago. Today was the unveiling of the new Jets logo; an event that I refreshed the same page for hours to witness. There had been numerous leaks over the past few weeks, but nothing had been confirmed. When the page loaded at exactly 5:00 PM EST I saw this image: 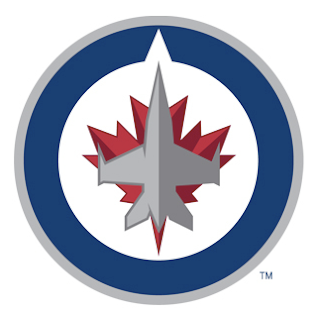 Take a moment to examine the symbol. What do you notice? Does anything pop out to you? For me, the absence of text was alarming. I am used to the traditional logo with the word “JETS” embossed across the front. After a few minutes of looking, I decided that I didn’t like it. Maybe it was me clutching to the traditional logo, or grasping for the memories of Selanne, Hawerchuk, and Hull. Nostalgic feelings aside, something just seemed…unbalanced.
I voiced two main concerns:
1) The exterior circles seemed far too bulky.
2) The Jet seemed vertically stretched.
I decided to test my observations with the Golden Ratio. Maybe it is only fitting that the “golden” analogy fits in this case as well. The Golden Ratio is a naturally occurring ratio that is supposed to be the most appealing to the human eye. Originally born from Fibonacci’s famous rabbit problem, the ratio (denoted by the Greek letter phi) can be approximated by dividing consecutive numbers in the Fibonacci Sequence. When the dust settles, it is approximated as 1.618. This ratio exists extensively throughout the plant and animal kingdoms (including humans).
I decided to test my hypotheses of bulkiness and stretchiness against the mathematics of ancient Italy. I printed off a logo and began measuring lengths of numerous sides. It is important to understand that the size of my print out doesn’t matter because we are interested in the ratio. Any enlargement or reduction would produce a similar image with an identical scale factor thus preserving the ratios. The diagram shows the logo with a black dot at each vertex of the design. I took the measurements between each dot tracing the jet. Along with this, I took the diameter of the various circles involved as well as the length and wingspan of the jet. I also measured the horizontal distance across the red leaf. 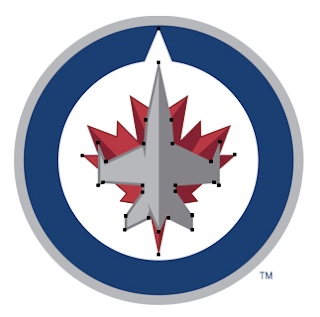 I first addressed the issue of the jet’s vertical stretch. If you took the length of the jet and compared it to the diameter of the circle (minus the grey strip) you would get a ratio of, you guessed it, 1.61. This is not a surprise because every graphic designer knows of the golden ratio. It seemed as though the jet was in perfect harmony with the circle, but I continued.
The vertical distances all seemed to follow the golden ratio, but the horizontal distances all fell a little short. First off, the wingspan was compared to the inner, white circle’s diameter. I thought it would have been a genius move on the behalf of the designers to have the length of the jet correspond with the blue circle and the width correspond with the white, but this was not the case. The ratio between the white diameter and wingspan was 1.83. too large. In order to get closer to phi, the wingspan would need to increase. This strengthened my initial feeling of vertical disproportionally.
Then it struck me, what if the red leaf next to the wings was there to compensate for the necessary skinniness of the jet (to make it as realistic as possible). When the leaf’s width was measured and compared to the white diameter, the ratio was 1.34. So the leaf went too far. In order to comply with the golden ratio, the leaf’s width would need to be lessened. I saw this as another “golden” opportunity to make the logo more intricate.
As the calculations of length continued to lie suspiciously close to phi, and the calculations of width consistently fall short, I began to build a mathematical case for my initial impression of disproportionally.
The question of bulkiness was addressed with area. I used the measured diameters to get ratios between the areas of the various coloured bands and the middle whitespace designed to fit the jet. The calculations were as follows:
Area(Whole Logo) = 136.85 cm^2
Area(White Inside) = 70.88 cm^2
Area(Blue Strip) = 55.80 cm^2
Area(Grey Strip) = 10.17 cm^2
I figured that the ratio between the coloured strips and the inside was dominated by the strips. This gave the logo the bulky feeling. I took the ratio of their areas:
A(Strips)/A(White) = 70.88/65.97 = 1.07
Miles away from phi. the strips would have to be thinned drastically to reach the ratio. Exactly how much can be figured out algebraically. (I will leave that to the reader if they so please).
Also, the ratio between the total area and the area of the white inside is 1.9. Again, if the strip was narrowed or the white space increased, the ratio would approach a more attractive ratio. According to phi, my impression of bulkiness was grounded.
Now I understand that there are other factors at play. If the jet was fatter, then it wouldn’t look streamlined. Also, the memories of better days of Winnipeg hockey may skew my decision. Even considering those, the fact of the matter is that the logo, devoid of its meaning or significance, seemed unbalanced to me upon first sight. This only opens up a plethora of options for me (or more importantly, my students) to explore. Can we find the perfect sports logo? If it could be created, I would guess that Fibonacci would be making numerous appearances.
NatBanting