Skip to the content
I stumbled upon the “root” of this activity late in the school year after I had already taught the unit on radicals and their approximate values to my Grade 9s. I modified its purpose, but the original framework is credited to John Scammell. (@scamdog) I found the concept to be a fairly easy one for the students to grasp once the identity of a root was explored. Students know what a square root is. In fact, I was challenged by a 7 year old boy who I was babysitting just the other day. His older sister–an 8 year old genius–was obviously giving him a crash course in radical mathematics. She had explained to him that square roots can be presented as a problem. He challenged me with this:
“What is the Square Root of 3? I mean, what is the square root of 9?”
This statement is revealing for two reasons. 1) For many students, no matter their age, math begins with an answer. You then form a question, jeopardy style, to help disguise the number. In this case, the child’s thinking shone through because he leaked his answer prematurely. 2) There are only certain numbers that can be square roots. This understanding lingers far after they have entered the world of algebra. The child immediately branded the square root of 3 as a false question and quickly changed it. After all, it would be ridiculous to have the square root of three; that is almost as crazy as asking for the square root of 10, or 7.
The first revelation stems back years into the way mathematics has been taught and viewed. I would hope that every entry on this blog aids in the examination of this problem. This specific entry’s focus is on the second problem:
How can teachers of mathematics get students to see radicals as numbers with a set value?
Young students establish a list of numbers that are acceptable square roots. The list includes: 4,9,16,25,36… Ironically, they often leave 1 off this list. I found that linking this established list to the values of all other square roots helps students to see their numerical value. I link them together using the Pythagorean Theorem, the Spiral of Theodorus, and a simple 6 inch ruler.
I do this activity in pairs. This keeps both parties invested in the activity, and also cuts down on the scissor time. First I distribute each group a piece of card-stock, a 6 inch ruler, and a piece of basic printer paper. I give them basic instructions on how to construct the Spiral of Theodorus. I also take the opportunity to give a brief history lesson and examine the intricacies of the shape. Instructions on constructing the spiral can be found on @scamdog’s blog here. I also use the SMART board to show an interactive version of the spiral. My spiral is shown below. 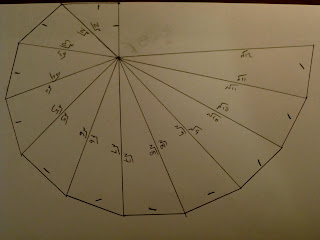 After the spiral is constructed, it is cut out into its individual constituents. Make sure that each triangle has its measurements on the interior or they will be lost when separated. The students use the Pythagorean theorem to label the sides until they find the pattern. When all their triangles are ready, they label one side of their new ruler with the inches marks. 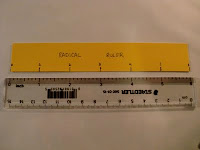 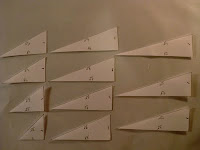 Right away I get the students to compare the accessible square roots with the ruler. If they put the side lengths of sqrt(4) and sqrt(9) against the ruler they see that they actually measure 2 and 3 inches respectfully. Actually placing various sides against the ruler shows which values the square root falls between. 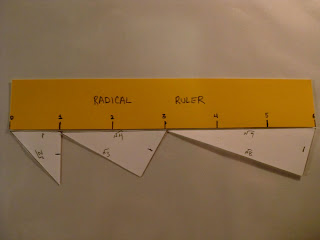 After some initial investigations with the ruler and triangles, they begin to mark off the square root’s lengths on the other side of the ruler. As they count up, the ruler markings align at spots like 2, 3, 4 etc. I have found that after root(12) the markings become too crowded when 1 inch is used as the base unit. After the markings are done, the ruler may look something like this. 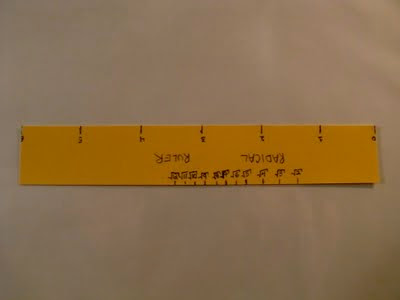 Now that the relationship between “irregular” roots and the number line is established, the teacher can prompt all kinds of constructions and investigations:
There are no markings before 1. Do any square roots exist here?
How could those roots be constructed?
Where are all the points where both sides synchronize?
How can we use these synchronization points to estimate roots?
Why does the distance between the roots narrow as they get bigger?
How could we use triangles to construct sqrt(20)?
How many new square root lengths can you construct with your current triangles?
This is only the beginning. Students can play with right angled triangles to construct radical lengths. When they begin to take on a concrete measurement, having sqrt(43) for a final answer won’t seem as impossible to them. The square roots will take their appropriate spot on the number line–alongside the counting numbers.
Square roots are tricky numbers. They cannot be drawn, but can be constructed. Most can’t be rationalized, but can be estimated. Sometimes they don’t exist but we use them anyway. The Radical Ruler is a great step toward understanding the true, numerical identity of radicals.
NatBanting

I stopped reading this post as soon as I read the point that, for students, math begins with an answer. (Don't worry, I plan to read the rest of the post. But I needed to respond to this; it is so mind-blowing.)

I learned under Dr. David Pimm of Open University (UK) and the University of Alberta (CAN) during my Diploma in Math Education studies. He argues that math begins with a question; in fact, it does not exist until a question is asked. All the demonstrating and lecturing about math in the world does not involve math until a mathematical question is asked.

This discrepancy is very revealing. It tells us what math is and what math education is. Most students learn to expect math questions and problems to be short, quick, to the point, solvable and structured around "clean" answers (often related in some way to integer components). They anticipate the answers before they anticipate the questions. I am not sure if they even consider the math.

I wonder what they are really learning? Is it math? What to them is math? Is this why so many students are so disconnected with math and why they are proud to have failed it and ashamed to have aced it? After all, from their perspective, if answers they anticipate before math, what have they aced?

I think we have done students a great disservice if they ace math in elementary, secondary and even tertiary school without ever actually learning that math is all about the question, the quest and struggle to tackle it and the discovery of pattern that limits to (an) answer(s). They completely miss the point and the empowering strength of math process and pattern. And in the end they really have nothing to use in their lives beyond the "math" lesson.

So, why do they need to learn this? That question makes so much sense now.

Shawn: You have stated, very elegantly I might add, what I see as the core dilemma in mathematics classrooms around the world. Math is packaged very nicely, and it now comes complete with bright coloured manipulatives and access to droves of online support. Very little time is spent getting messy with the mathematics.
That was where this activity is going. Having student construct and POSE questions with the mathematical tools they have created. It can prove to be an empowering process.
Thanks for your comm[itm]ent.