Background:
On June 15th, my Grade 9 class and I hosted our second annual math fair. What started out as a small idea has grown into a capstone event of their semester. This year, we had 330 elementary school students visit our building to take part in the fair’s activities. Several people (following the hashtag #TDCMathFair2016) commented that they would like to do similar things with their student transitions. This post details the rationale behind the event, how we structured it, what stations we had, and feedback/advice from our exploits.

Rationale:
I pursued this opportunity with a two-pronged focus. First, I wanted to showcase a mode of teaching mathematics that relies heavily on student collaboration, conjecture, and re-calibration to a problem situation. I wanted students to experience real mathematical choice after encountering a task that is not immediately solvable. Through their actions, they expand the set of information they have and unlock further opportunities for action. In doing so, they activate curricular understandings. We designed or adapted classroom activities to fit the scale of the event, but their classroom viability remained at the heart of the event. I didn’t want the fair to be something that was only possible outside of the classroom walls; I wanted to emphasize to all involved that mathematics has an active character and we can carve a curriculum out of that action.

Second, I wanted an event where school communities would have a chance to network. The transition from middle school to high school is an onerous one filled with social and academic challenges. I wanted future students to meet future peers and teachers as well as become familiar with the building. This is a very pragmatic concern. On top of that, I wanted the opportunity to communicate with the elementary school teachers of my future students. Very rarely do we get a chance to talk. This was one way where I could plan an event for their kids and open lines of communication for future interactions.

Structure:
The day was built around groups of students rotating through four stations. Each group of elementary students (7-9 students/group) was paired with two of my high school volunteers. The older students acted as guides throughout the event. This was a good ratio; there was hardly a time when a group of elementary students were left alone. There was always someone there to support or extend thinking. I also had a teacher at each station to spearhead the activity. These were pre-service teachers or teachers who just received their certification. That meant that they were available during the school day.

The class and I worked out which groups would rotate to which stations during the four time slots. Each group leader received a rotation sheet and followed it. This worked very well; it allowed us to keep numbers consistent at each station throughout the day. We had 18 groups come in the morning and 20 in the afternoon. It was a full day for the leaders.

I wanted to have an outlet for the leaders if a group of students was operating well below grade level or had exhausted the possibilities at the station. We provided this in two ways. First, there was an estimation station set up where students were asked to find a time to provide an estimate of the number of balls in a large cube I found in the school’s storeroom. 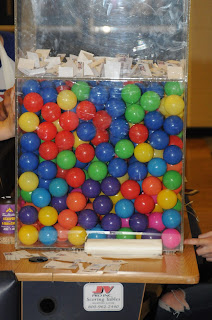 Second, we set up a free play symmetry station with a collection of tiles from Christopher Danielson and TMWYK. If there was time to burn, we sent kids there. Only problem was, it was tough to get them to leave. If you are planning an event with this many students, I would recommend you have these safety valves worked into the day. 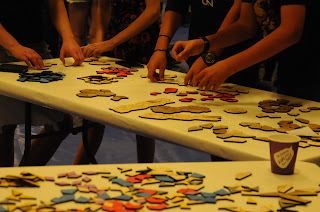 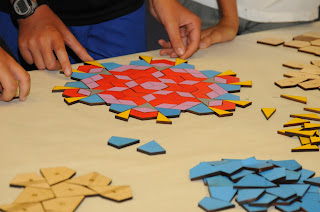 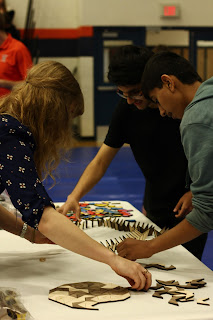 The Stations:
There were four stations that students rotated through. Each lasted 30 minutes with a 15 minute break between stations two and three for snacks and estimations.

Sweet 16
This activity focused on balancing multiple equality statements. It contains a very low floor. Students can deduce viable options to some of the equality statements. It also has a very high ceiling. To balance one of these, it takes inductive leaps of faith and several revisions. I adapted puzzles from this book into a classroom resource published here. The ten puzzles in my resource are the ten that students worked on at the fair. Students worked on 2ft by 2ft whiteboards with the 16 Boxes template on them. 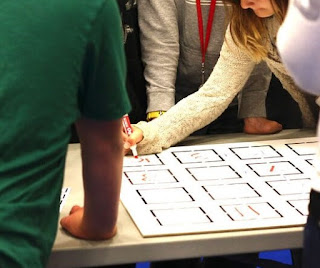 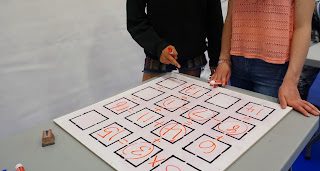 Tic-Tac-Toe-Ception
Here, students played a game of Tic-Tac-Toe where each space in the large grid is filled with another game of Tic-Tac-Toe. The rules are explained here, but we made a single adaptation. If you send your opponent to a board that has already been won, they do not get to go anywhere they like. Instead, they must play in the already won square with no chance of winning it back. In this variant, it is an advantage to send your opponent to a previously conquered square because, while they still get to dictate your next play, they place a meaningless mark. As students approached mastery of our version, we introduced the rule change to keep them on their toes. 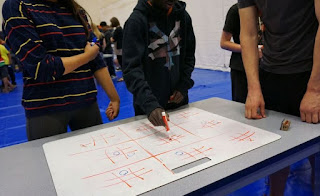 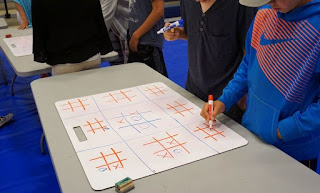 Spa-Ghet-Rekt   (the kids named it)
This was an adaptation of Alex Overwijk‘s lesson. The students were presented with a pile of pennies, more spaghetti than they could ever need, and a cup that had been fashioned into a hanging basket with paperclips. They were asked to simply test how many pennies a piece of spaghetti could support. After this, they were asked to estimate how many two pieces of spaghetti would support, what about three, etc. You get the point. The whole time, we were entering their data into a communal Desmos graph and asking students for their estimations and reasoning before mindlessly piling pennies into baskets.

About half way through, we told the kids that there 184 pennies weighed one pound and asked them to estimate how many pieces of spaghetti they would need to hold a 2.5 pound weight. When they gave their reasoning, we went to the crash mats and tested it. Tension ran high as pieces of spaghetti were removed one at a time to reach a breaking point. This was the highlight for many students. We harnessed mathematical intuition, extrapolation, graphical literacy, and even some conversations on gravity, force, and potential energy.

Word to the wise: this makes a mess. We went through over 20 kilograms of spaghetti in the four hours of running the activity. Our kids did a fantastic job cleaning up, but get the okay from your caretakers before including this station. 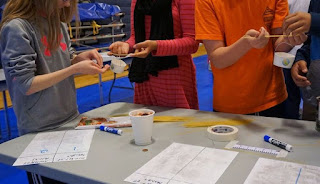 Dark Room Escape
A colleague took the lead on designing a dark room escape in a separate room that could accommodate 40 students at a time. He ended up splitting them into four quadrants; each quadrant needed to solve a network of puzzles to unlock their part of the final challenge. If all four succeeded, the group won a prize.

The challenges were very intricate and well thought through. It took a lot of work, but we wanted to have a signature station that students would remember and look forward to next year. We are planning on using some more budget to get more materials to expand the dark room for the 2017 edition of the fair. 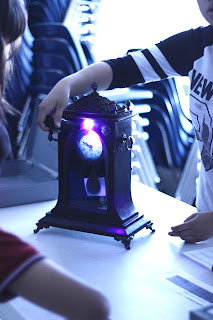 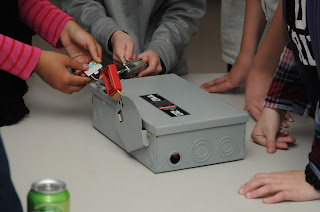 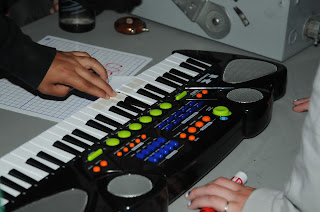 Feedback:
The response to the fair was overwhelmingly positive. It was really cool to have an entire educational community pull together for a day. Teachers commented that is was really good to see the consultants, coordinators, superintendents, and trustees in the building and interacting with students. We really were all together as a division devoted to mathematics.

The local newspaper was there and published a short article the next day. My students commented that they were getting texts from friends who attended still thinking about the stations. One student said that she lives on the same street as a elementary participant. As she walked into her house, she overheard the student telling her mom her strategy on Spa-Ghet-Rekt.

Several students attended for the second time and commented that it was “just as much fun as last year” and they “wish they could come back again”. I just smiled and told them that they could, but they would be group leaders. I found out later that one school even included pictures of the event in their Grade 8 graduation video.

The Saskatchewan Mathematics Teachers’ Society periodical The Variable published a recap article from the perspective of a teacher volunteer as well as one of my Grade 9 students.

Perhaps the coolest thing to come from this was a phone call from a local woman who read the article in the paper. She talked to me for ten minutes about her 10-year-old great-grandson who loves mathematics. She was just calling to chat about how mathematics can challenge “youngsters” (her word). We finished our conversation with her saying, “It’s just so good for this old lady to see kids still having fun in such an awfully serious world”. After hanging up, I sat in silence for a few moments in my classroom. At that moment, I knew we had achieved our goals.

This looks really cool – I think I'm going to borrow some of the activities (sweet 16 looks promising) next year.

Thanks for sharing those wonderful ideas, it looks fantastic!
I would love to know more about thw dark room -can you please explain what you did ther?

Hello Nat,
This is great.
I have been involved with math fairs like this for about 16 years. There is an ongoing workshop every spring at BIRS, and perhaps next April or May you might be able to come and tell us more about what you are doing. (see http://www.mathfair.com/workshops-and-conferences.html).
– Ted