The progression followed by most teachers and resources during the study of surface area and volume is identical. Like a intravenous drip, concepts are released gradually to the patients so as to not overdose them with complexity. Begin with the calculation of 2-dimensional areas, and then proceed to the calculation of surface area of familiar prisms. (I say prisms, so a parallel can be drawn to the common structure for finding the volume of said prisms. That is, [area of base x height]). In this way, surface area is conceptualized as nothing more than a dissection of 3-dimensional solids into the now familiar 2-dimensional shapes.

This is not a condemnation of this logical progression; the visualization necessary to dissect prisms is surely an important spatial skill. The trouble for me is in the nature of the problems presented to students. Actually, my problem is that every problem is, in fact, presented to students–ready-formed with a pre-determined solution procedure. Every decision has been made; there is nothing left for students to do.
Now this is not uncommon throughout school mathematics, but it seems to bother me more with surface area and volume because they present themselves, at least for me, as topics accessible to student reason. Teachers may choose use a variety of physical models, and the concepts can be modelled directly with pictorial representations. They also are concepts that students grapple with at a very young age, making them an area of personal expertise. All these things considered, I find it unfortunate that students are not asked to make a single decision with regards to their manipulation.
The most ridiculous part of the process is the images that appear in the section entitled “Calculating Surface Area and Volume of Composite Figures” (Or whatever your resource decides to name it). Here, we find completely random arrangements of solids, fused in every which way to each other. While some books attach gestalt-like connotations to the fusings (such as the cone and hemisphere that appear to be an ice cream cone), many unabashedly leave them for exactly what they are: Pre-fabricated and essentially random arrangements of solids. 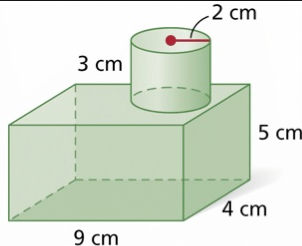 Building on a common thread that has emerged through my blogging over the years (see here and here for examples), I attempted to design a task that would allow space for students to make decisions about the surface area and volumes of such arrangements of solids. I wanted to create a prompt where there was a larger goal which might allow the concepts of surface area and volume to become relevant during its resolution. In short, I did not attempt to challenge the ridiculous patterns of idealized fusings present in every textbook. Rather, I made them the focal point of a mathematical decision. My intention by doing so was to trigger a deeper mathematical engagement with the topics as students used them to address the problem that emerged as relevant in their active, mathematical decision making.
The task:
Students are given a set of six solids. It includes a cube; two cylinders; a right, square pyramid; a right cone; and a hemisphere. Rather than provide them with a pre-ordained arrangement of the solids, the task makes the arrangement the key mathematical decision to be made.
I explain the parameters for a successful fusing. Sides must be fused completely to other sides. Portions of faces cannot ‘hang off’ or partially fuse. Also, fusings must all be formed between faces. In other words, they could not balance the cube on the dome of the hemisphere, but could fuse one of its faces to the circular underbelly of the hemisphere.
Their task is as follows:
Combine any number of the six solids provided to you to create a shape that has a surface area (in square units) as close as possible to its volume (in cubic units).
I created this slide to aid in the introduction of the task.
Anticipated student action:
1) Calculate and then fuse
A logical reaction to a mathematical choice is to gain an understanding for what one is working with. These groups first determine the surface area and volume of each of the six solids and then arrange them in a variety of combinations (usually based on some type of rule). Some choose to fuse the solids that have very similar surface areas and volumes; others choose to ‘heal’ the shapes with large gaps in surface area and volume through fusing. Either way, they work intimately with both the formulae and the idea of overlapping surface area.
2) Stacked arrangements
These folk notice that when solids are fused, their surface area is affected but their volume becomes a simple summation. It is then deduced that if they start with a prism that has a greater surface area than volume, they could stack them repeatedly until the values are quite close. Luckily for the teacher, there are plenty of stacking permutations available. Once again, this involves interaction with the calculations as well as a deeper layer of reasoning superimposed through the new decision making required by the task.
3) Plus-minus arrangements
This strategy uses a calculation of the surface area and volume to develop a third ‘statistic’ for each solid: Net loss. Here, students calculate the total effect of fusing a solid to an existing arrangement. They do so by subtracting the fused side from the surface area calculation and then comparing it to the solid’s volume. If a fusing adds 45 square units to the surface area (taking into account the effect of overlap) and only 35 cubic units to the volume, that fusing has a +10 effect to surface area. Alternatively, some may think of it as a -10 effect to volume. In order to approach surface area and volume parity, solids are chosen to address the current gap of the arrangement. If their fusing currently has 25 more surface area than volume, a solid should be fused that has a negative effect on surface area. That is, would result in a larger gain in volume than surface area, thus narrowing the gap of the arrangement.
Summary:
The task is offered with the simple intention of allowing students the space to make mathematical decisions. It shifts the passive digestion of fused solids into an active creation. In doing so, it does not eliminate the opportunity for students to practice calculating the surface area and volume of composite figures. Rather, it couches this execution in a larger strategy. The calculations are deemed necessary to address a problem that emerges through mathematical action. That is, perhaps, the heart of it all. Rather than students being relegated strictly to problem solvers, they are provided opportunities to become decision makers–problem posers.
NatBanting

One reply on “Solid Fusing Task”

What grade level is this?

Have you seen the Beast Academy materials? Their 3A books work with perimeter and area. The beasts discuss how they can figure out which plank is biggest. (They consider length, perimeter, and area, though they don't use the terms at first.) The practice problems have students work on skip counting and subtracting, along with basic addition. Beast Academy problems include lots of problem solving.